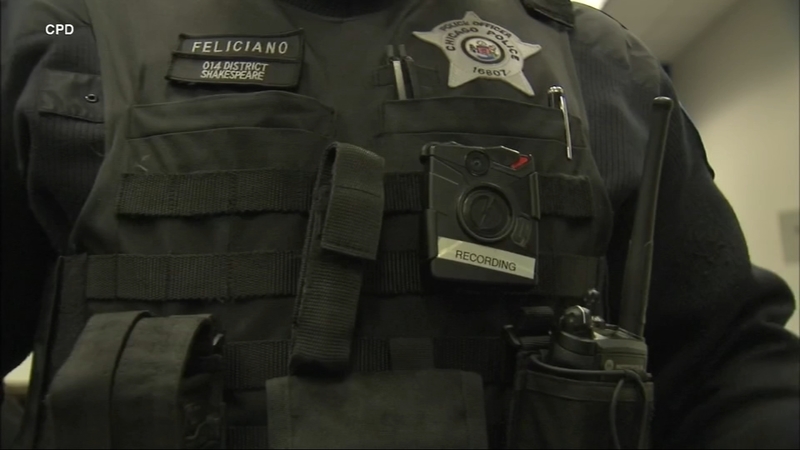 CHICAGO (WLS) -- For police officers, guns and body-worn cameras are similar devices: they are rarely necessary, but when needed they are invaluable.

Such was the case last weekend when both guns and cameras intersected on East 71st Street during an incident that left one man dead, a community on edge and police officials once again on the hot seat.

In an unusually speedy response, city police leaders released a video clip from an officer's body camera that shows Harith L. Augustus, 37, in a fatal confrontation with officers.

The video provided by police zooms in to what appears to be a pistol holstered on Augustus' belt. Investigators said that Augustus had become "combative."

A CPD officer, who had completed field training but was still officially on probationary status, opened fire and killed the South Shore resident.

On Monday, the ABC7 I-Team spoke with representatives of Axon company, the contractor that provided body cameras to Chicago police, about why was no audio accompanying the incident video.

"A lot of people have some misconceptions about this Axon Body 2 camera," said Steve Tuttle, a spokesperson for Axon.

Tuttle said the police cameras are recording video at all times, but audio is activated only when officers push a start button when a incident is beginning.

On Saturday that apparently happened only after the actual shooting, leaving police with approximately 30 seconds of silent "buffer" video that is regularly recorded by the devices.

Officials say the body cameras do not routinely record audio because it "protects the officer's privacy," according to Tuttle.

"I could be patrolling around in a squad car for an hour or two with my partner and we could be talking about the chief or personal things. But until policy says you need to begin recording, it protects that privacy and that's why when people see these videos the first 30 seconds, there's no sound," he said.
Report a correction or typo
Related topics:
chicagosouth shorepolice involved shootingi teamchicago police departmentbody cameras
Copyright © 2021 WLS-TV. All Rights Reserved.
I-TEAM
Tips for the best deals, savings for Amazon Prime Day
Glen Ellyn homeowners battle insurance over $300K water damage claim
IL unemployment scams surge near end of enhanced benefits
ITT Tech student debt will be wiped out by US Dept. of Education
TOP STORIES
Woman fatally stabbed on Wacker Drive in Loop: police
Holocaust survivor Fritzie Fritzshall dies at age 91
Englewood mass shooting home owned by CPD officer
Severe weather, strong storms expected Father's Day: LIVE RADAR
Chicago joins US in celebrating Juneteenth 2021
Buyers lining up to check out 'house from hell' listed for nearly $600K
Hundreds celebrate Puerto Rican pride at annual parade in Humboldt Park
Show More
Juneteenth celebrated with a special screening of 'Summer of Soul'
18 shot, 1 fatally, in Chicago weekend violence
Tips for the best deals, savings for Amazon Prime Day
'Gordon Ramsay Burger' coming to former Chicago Walburgers location
Cole Beasley would rather retire than get vaccinated, follow NFL COVID rules
More TOP STORIES News