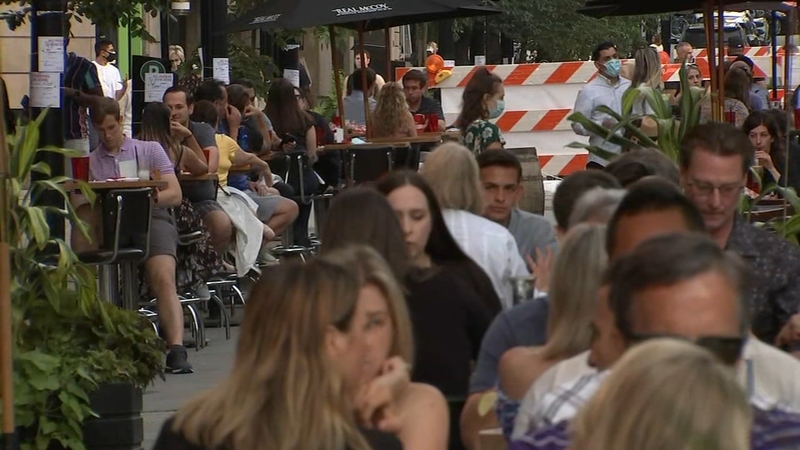 CHICAGO (WLS) -- As Chicago continues to move toward reopening, more restaurants are cleared to open up, while others are expanding their street dining.

Starting Friday, the city will allow restaurants to offer outdoor seating on portions of Clark Street and Wells Street in the city's River North neighborhood.

Wells Street will close between Huron Street and Superior Street to allow restaurants to set up tables and expand dining capacity on the street. That section of Wells will be closed every Friday through Sunday between 4p.m. and 11 p.m. for the entire patio-dining season.

Clark Street will close between Grand Avenue and Kinzie Street.

Allowing table service in the street is a lifeline, a means for survival.

"It brings us almost up to the same size of a dining room we have for Frontera," Chef Rick Bayless said Friday. "As restaurateurs, we need to take that burden on ourselves and everybody stays safe, If people aren't safe we're going to go backwards. I don't want to go there."

As COVID-19 positive cases continue to rise, restaurant owners are leaving nothing to chance.

"If we know of a precaution to take we're going to take it," Bayless said.

But not every business is being so careful, so Gov. JB Pritzker announced new guidelines Friday, threatening business owners with warnings, followed by misdemeanor charges and fines if health guidelines, like masking, are not being followed.

"We are obviously enforcing that every guest as they're moving about the space wears a mask; all our employees are wearing masks," Jerrod Melman with Bub City said. "We're temp checking our employees every day, as well as temp checking guests going into restaurants."

Pritzker said the guidelines are meant to increase safety.

"This is one way for us to make sure that businesses that have been scofflaws on this subject know that there is a real penalty at the end of the line here," he said.

But some Republicans say the governor is again overstepping his authority, demanding an emergency session to weigh in on punishments.

"I am very supportive, but I am not going to let the governor ignore the legislative branch, and I would hope that he would do that," state Rep. Jim Durkin said. "And the democrat leaders should stand up and do something about this; I mean they've let the governor make all these decisions."

Thirteen lakefront spots are now allowed to reopen after COVID-19 regulations kept them closed until this week.

Reggie's on the Beach welcomed their first customers of the summer at 63rd Street Beach Thursday.

"Today's huge," said Ed Calahan, co-owner of Reggie's. "We've been waiting for this since May."

Following the green light from city officials earlier this week, the bar's team wasted no time. Calahan said they're ready for customers just 72 hours after the go-ahead.

"I hope that the anticipation that the community has had and all those people that called and emailed and texted us for the last few months, I hope they come out." Calahan said.

Customers must wear masks when they are not eating. Only outside seating will be available and patrons must follow social distancing guidelines.

"The Chicago Park District will use the same guidelines required by the City for all other businesses allowed to return to operations. The District is working with each concession on its plans to adhere to the City guidelines and prevent large gatherings. The actual list of concessions is fluid as these operators are currently weighing their options. Proprietors who decide to open can do so as early as this week provided the necessary health and safety procedures are put in place.

"With the exception of the harbors, golf courses, and trail, the lakefront, including beaches, remain closed. Lifting restrictions on lakefront concessions allows the City to maximize the use of outdoor space while supporting lakefront businesses. Lakefront restaurants with patios can accommodate seated dining service; grab and go concessions will require patrons to make their purchase and keep it moving."