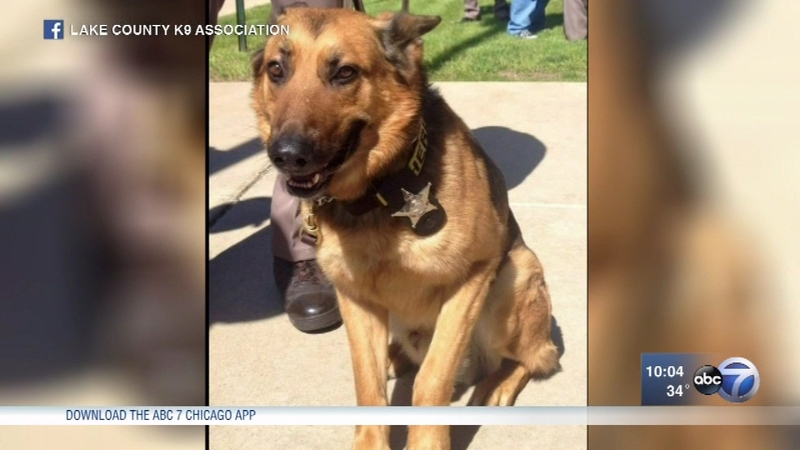 GARY, Ind. (WLS) -- A "suspect" and a Lake County Sheriff's Department police dog were wounded in an officer-involved shooting Wednesday in northwest Indiana, according to authorities.

Indiana State Police said a sheriff's officer made a traffic stop in the 700-block of 42nd Street when a passenger, and 18-year-old man from Merrillville, Ind., fled from the car.

The car, which state police said was a silver 2007 Toyota Avalon, and its driver fled westbound on 42nd Street from the stop. Police said Thursday they found the driver, who made a statement, and "is not considered a threat to this case,"

The officer and his K-9 partner Blade, who are part of the anti-gang unit, pursued the passenger, who ran down an alley. As they pursued him, Blade was shot in the face when the man opened fire.

"He grabbed the weapon and he saved the officer's life. There's no doubt about it. He took the bullet for the officer," said Lake County Sheriff John Buncich.

Authorities said Wednesday the passenger was taken to North Lake Hospital in Gary, Ind., with life-threatening injuries. On Thursday, police said he was transported to Loyola University Medical Center in Maywood, Ill.

Officials said Blade is still undergoing tests, but veterinarians said he is currently in stable condition. The sheriff's office said the officer involved accompanied his partner to the veterinary hospital.

"He's one of our officers. That's the way we look upon him, so our prayers are with the dog," Buncich said.