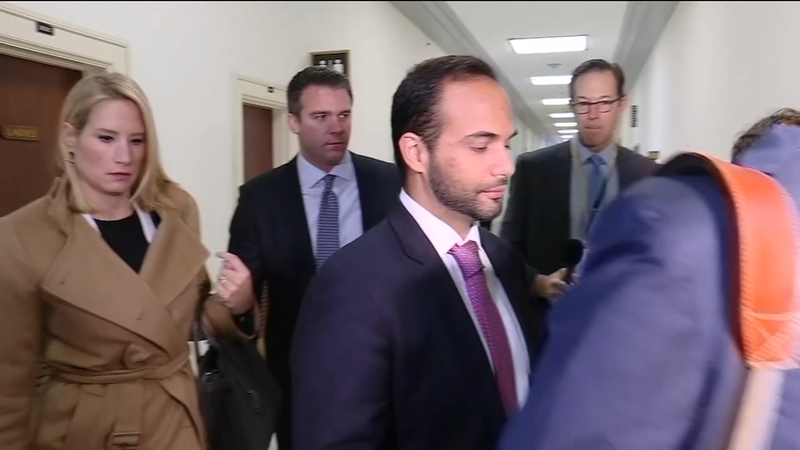 CHICAGO (WLS) -- Nearly seven weeks after he was sentenced to a short jail term for lying to government agents, Chicago foreign policy expert George Papadopoulos returned to Washington, DC-this time to tell his story to a closed panel of Congressional Republicans.

Papadopoulos' afternoon-long testimony on Capitol Hill raises questions about why the FBI decided to launch its counterintelligence investigation into Donald Trump's campaign and Russia, according to a member of the House Judiciary and Oversight Committee.

"What we're finding is we have George Papadopoulos, the person who was supposedly the whole reason why we have this Russia collusion investigation going on, and yet he's never knowingly met with a Russian government official, he's never traveled to Russia," said Rep. Mark Meadows, a North Carolina Republican. "The facts that we're finding in here are astounding that we would allow this type of investigation to be embarked upon without any real solid foundation of collusion."

The North Sider, a DePaul graduate, found himself in the middle of special counsel Robert Mueller's investigation for his activities as a volunteer foreign policy adviser with the Trump 2016 campaign. He pleaded guilty to lying to the FBI and was sentenced in early September to two weeks in jail, a sentence he apparently has yet to serve.

Papadopoulos, 31, played a central role in sparking the Russia counterintelligence investigation, which ultimately turned into the special counsel probe. The FBI launched the investigation in July 2016 after Australian diplomat Alexander Downer reported a conversation with Papadopoulos about alleged dirt on Hillary Clinton, FBI officials have said.

According to two Republican lawmakers who attended Thursday's closed-door interview, Papadopoulos described his interactions with various officials in 2016, including professor Joseph Mifsud, who told him the Russians had dirt on Hillary Clinton.

Democrats have countered that Papadopoulos' testimony is not to be believed and his assertions are the product of a "right-wing echo chamber."

"He's been convicted of lying to the FBI, so you've got to take his testimony for what it's worth," said Maryland Rep. Jamie Raskin, the sole Democrat to attend Thursday's interview with Papadopoulos. "I see the whole thing as a footnote to a sideshow of a wild goose chase."

He has a new attorney representing him at the hearing: Caroline Polisi from New York. She replaces the Chicago attorney, Thomas Breen, who represented Papadopoulos in the criminal case against him.

"He has nothing to hide, and in fact would like to better understand the circumstances leading up to his arrest," Polisi said in an email to CNN. "There will be no spin ... just facts. He has made mistakes in the past - for which he has openly accepted responsibility. He wants to move forward with his life and help the committees in any way that he can."

Papadopoulos' recent claims are sharply different than what was described at sentencing, when Breen described his client as nave and stating that "the danger of dealing with Russia is not that obvious."

In an interview posted Thursday on Hill.TV's "Rising" program, Papadopoulos said that he should not have "focused on" brokering a meeting between President Trump and Russian President Vladimir Putin.

"I really probably shouldn't have focused on trying to set up a meeting between Trump and Putin," Papadopoulos told Hill.TV's Buck Sexton during the interview that was recorded prior to Papadopoulos' congressional committee appearance.

The Trump administration has held that Papadopoulos was a low-grade campaign volunteer-a mere "coffee boy" was the initial description used by a former campaign official when the scandal started.