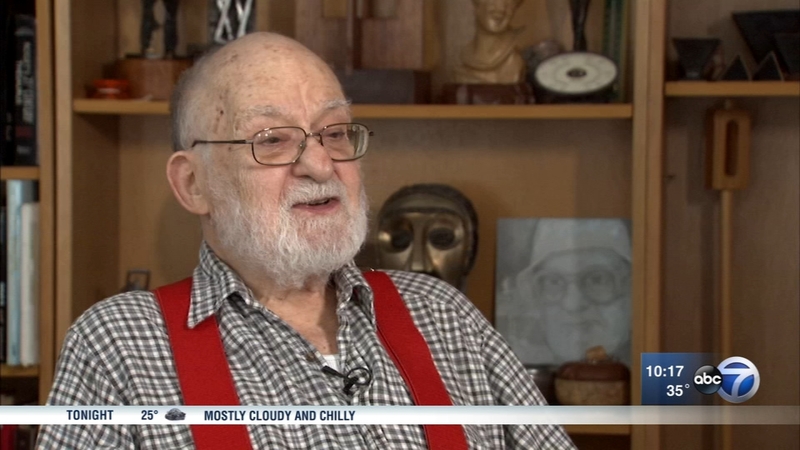 Members of the super-secret Ghost Army were masters of illusion, tricking German troops during the vicious fighting that followed D-Day during World War II.

They were artists, designers, actors. And they were all ghosts.

They did it with fake tanks and phony audio recordings that were part of a mission so secret that it remained classified for decades after the end of World War II.

As an 18-year-old art student joined the 1,100-member team in a post-D-Day effort to fool the enemy.

Officially they were the 23rd headquarters special troops. Later they would become known as the Ghost Army.

Their instruments of deception were things such as inflatable rubber tanks, trucks, artillery and airplanes. From the air, German reconnaissance believed they looked like the real deal.

"All you had to do was attach an air hose to them and blow them up. I mean inflate them," Bluestein said.

Five hundred-pound speakers would boom for miles the prerecorded sounds of an army on the move. And fake radio operators would send bogus transmissions meant to be intercepted. It worked again and again.

In one of their most critical of 20-plus operations, the Ghost Army pretended to be two U.S. divisions stationed, in reality, miles away.

The Germans fell for it.

"And of course in the morning when they shelled us, we said, alright. Our mission is accomplished," Bluestein said.

The real divisions crossed the Rhine to the north with minimal casualties.

In those stolen war-time moments, Bluestein -- like his fellow artist soldiers -- would sketch what he saw and even created a miniature tea set out of bullet casings.

Bluestein has spent decades creating sculptures, paintings, masterful works of art. That's what's defined his life, but he also is humbly proud of the role he and his fellow magic men played to help end World War II.

"This was our purpose in war. We put on a magnificent act. A show, and it was successful," he said.

Bluestein is one of about 20 members of the Ghost Army still alive today, and he was the sole representative of his outfit two months ago as the Ghost Army was honored with the dedication of a new memorial in Luxembourg.

The work of the Ghost Army was kept top secret by the government until the 1990s.

When Bluestein's parents asked what he did in the war, he answered, "Oh, I worked in a camouflage unit."