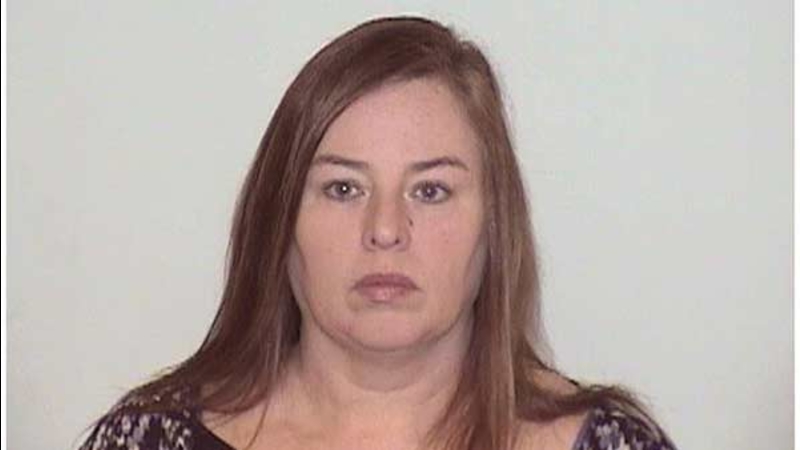 FOX LAKE, Ill. (WLS) -- The widow of a Fox Lake police officer who died in a staged suicide has surrendered to the Lake County sheriff Wednesday after being indicted by a grand jury.

The indictment was read in court as Melodie Gliniewicz, 51, surrendered at the sheriff's office Wednesday afternoon.

Lt. Gliniewicz died Sept. 1. Authorities claim he staged his suicide to look like a homicide because he feared discovery of his embezzlement from a youth group.

Lake County authorities say as they investigated Lt. Gliniewicz's death, they learned money laundering had occurred involving the finances of the Fox Lake Police Explorer Post. The officer and his wife both helped run the group.

Detectives determined some of the personal expenses paid from the police explorer account included a trip to Hawaii, payments to businesses such as Starbucks, Dunkin' Donuts, Fox Lake Theatre, and over 400 restaurant charges.

Melodie Gliniewicz was indicted on four counts of disbursing charitable funds without authority and for personal benefit and two counts of money laundering.

Even though Joe Gliniewicz made $96,000 a year as a Fox Lake police lieutenant, authorities believe he and his wife lived a much more lavish lifestyle financed by the Police Youth Explorers Post. His social media pages were chock full of travel photos, including dozens from the trip to Hawaii in August of 2014. There are even photos of some of the outings alleged to have been paid for with embezzled funds on the memorial page for her husband.

"The photos are not going to help her, and they're potentially harmful in two ways," said ABC7 legal analyst Gil Soffer. " One, all these photographs of her eating at fancy restaurants or in Hawaii is going to raise the question, where did the money come from? Because if a suburban cop can't make enough money to support that kind of lifestyle, it's going to show that she should have had reason to believe that these funds were stolen. Also, it's pretty dynamite evidence in front of the jury for the prosecution to trot out photographs of living high on the hog off of stolen money."

Soffer, a former federal prosecutor, said Melodie Gliniewicz could face jail time and the case will probably not go to trial.

"It's really going to turn on what kind of case can the defense make to say, she didn't know. She didn't know that the funds that she was living up on, the funds that were being written into or drawn out of that account were stolen. She'd have to make that kind of argument. She can't make a strong case that she knew, I'd expect to see a plea agreement out of this ultimately," Soffer said.

Melodie Gliniewicz's lawyer released a statement saying: "Melodie has suffered greatly over the past few months and continues to move her family forward after the emotionally traumatizing events of September 1, 2015. Considering Melodie's cooperation with law enforcement, she is devastated by the decision to bring charges against her. Melodie is a victim of her husband's secret actions and looks forward to her day in Court to show the world her innocence."

The Lake County sheriff's department said Melodie's adult son D.J. Gliniewicz will not be charged in the case.

In the days following Lt. Joe Gliniewicz's death, she was the grieving widow surrounded by a grateful community.

"Joe was my best friend, my hero, the love of my life for the last 26 years. He was my rock, and I was his rock," she said September 3.

But prosecutors say Melodie Gliniewicz was also her husband's partner-in-crime.

"It became very clear that this Explorer account, the account where money was going for the Explorer youth program in Fox Lake, had been used to fund many personal purchases," said Det. Christopher Covelli, Lake County Sheriff's Dept.

"Honestly, it doesn't surprise me. I could see it happening the whole time because there's no way that you take all that money and take your family on vacation, and your family doesn't know about it," said Drake Talles, Lake County resident.

"Very disappointed, I belong to the American Legion, and we had a big fundraiser for them, and the wife and kids were there. And basically they kept the money," said John Tiahnybik, Fox Lake resident.