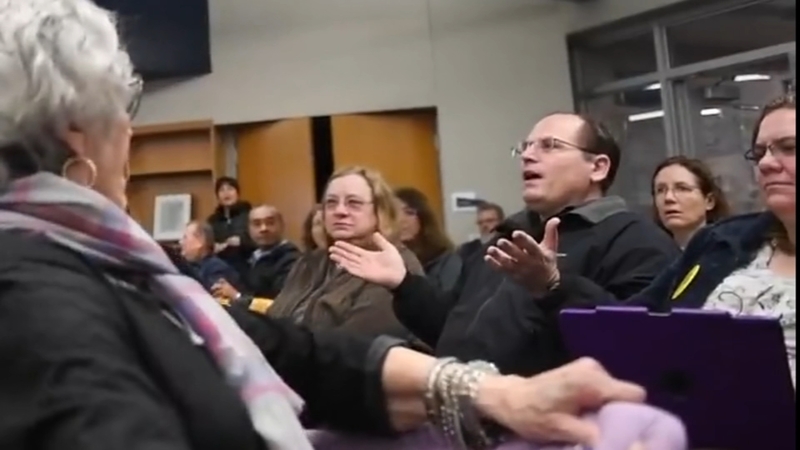 Parent responds with racist retort at school meeting: 'Why didn't you stay in Mexico?'

SALINE, MI -- A Michigan parent interrupted a school board meeting with a racist remark, while another parent was talking about how racism at the school was affecting his child.

Adrian Iraola, who is Latino, had a microphone and was sharing a story about his son crying himself to sleep because of the racial abuse he was being forced to endure at his school.

Iraola was mid-sentence when a man seated behind him spoke up.

"Then why didn't you stay in Mexico?" the man, later identified as Tom Burtell, said.

The interjection caused audible gasps and looks of shock from other parents in the room.

Other people in the audience can be heard saying, "You need to leave," and "That's disgusting."

The video was taken at the Saline Area Schools meeting and shared by Ann Arbor News/MLive.com.

Burtell's son posted on Facebook distancing himself from his father and his father's "views of hate." He also said none of his 10 siblings condone their father's actions.


"The only message I want to say is that our family condemns our father's vile beliefs," Tim Burtell said in a statement to ABC News from all 11 children and their mother, Joanna.

"He asked me a question...'Why didn't I stay in Mexico?'" Iraola said. "Because this is the greatest country in the world."

Iraola came to the United States 40 years ago. He owns three Mexican restaurants in the area.

Later in the meeting, Burtell took the mic, saying he's a victim of racism "all the time."

"Try being white and walk in a black neighborhood," he commented. "See what happens."