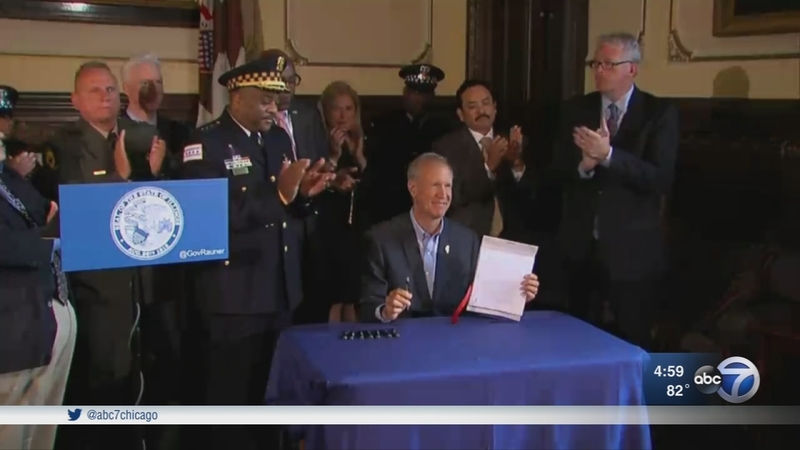 "Today is the day we stand together and send a loud and clear messages that we will no longer tolerate at the hands of repeat gun offenders," said Johnson, who has worked to tamp down gun violence plaguing the city.

The bill signing was the only movement in Springfield on Wednesday, which is Day 3 of the special legislative session, and there were no signs that the budget crisis may be ending.

More than 100 other bills languishing on the governor's desk since January and none are more important for the state right now than a budget.

Comptroller Susanna Mendoza tried to give members of the House Democratic Caucus a sense of the state's critical financial crisis.

"If they're worried about taking tough votes they should be more worried about telling parents why their children aren't going to start school on time, why people are going to be dying in their districts and these are their real consequences of not coming up with a comprehensive budget plan," Mendoza said.

But a meeting that Senate President John Cullerton, D-Chicago, called of the top four legislative leaders to work on a compromise did not happen as scheduled Wednesday.

"The governor pulled the plug on that, told Republicans not to go, I don't think he's very serious," Cullerton said.

"I'm the one who pulled out of the meeting. We had talked about it and I thought that it was a good idea earlier in the week but the fact is when I saw that after the meeting I had with the Speaker (Madigan) the other day, that we made progress, that he and I need to focus within the House of Representatives and stay on track," said Jim Durkin, a House Republican leader.

The governor cut short questions on the lack of any progress on the budget, only addressing the need for compromise when talking about the gun bill

"It shows what we can do, when we put our minds together we can get things done," Rauner said.
One more week is left in the special session.