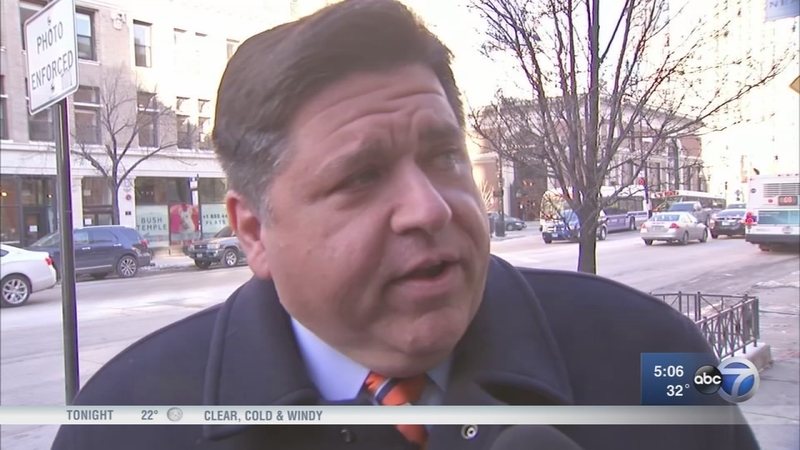 CHICAGO (WLS) -- As the race for governor continues to heat up, an FBI wiretap of a conversation between convicted former Governor Rod Blagojevich and Democratic hopeful JB Pritzker is about to take on a bigger role.

This weekend, Governor Rauner's campaign is buying ad time to air the entire phone call where Blagojevich is heard talking about pay to play politics with Pritzker.

The Rauner campaign will be taking what ABC 7 has been told is an unprecedented step for a primary by buying air time TV stations across the state to air in its entirety an 11-minute FBI wiretap conversation between Pritzker and Blagojevich.

The commercial including the complete wiretap conversation will be 14 minutes long.

The 11-minute phone call between Rod Blagojevich and JB Pritzker was recorded November 6, 2008, as the FBI was investigating Blagojevich for pay to play politics.

Governor Rauner first released a one minute attack ad using some of that wiretap, which Pritzker complained was an edited snippet. The new ad is a response.

"The people off Illinois need to know the truth about the corruption in our state, that's what that's about," said Gov. Rauner.

The ad is slated to air on TV stations in major markets across the state. In it, Blagojevich and Pritzker can be heard talking about possibilities of Pritzker being appointed to the US Senate seat being vacated by Barack Obama, or possibly as state treasurer or attorney general.

"Governor Blagojevich spoke with hundreds of people at that time, and bottom line, I was never accused of any wrong doing. This is a governor who is trying to distract from his failed record," said JB Pritzker, Democratic candidate for governor.

"It shows how pathetic our system is, how broken, anyone who would use an excuse and say, well I did something immoral, unethical, disgusting and self-dealing, but I didn't go to jail, so it's okay. Are you kidding me? Are you kidding me?" said Gov. Rauner.

"He can run a 30-second ad, or a 30-minute ad, he's not going to be able to distract from his own failures. But the truth off the matter is he's coming after me in this democratic primary because he knows he'll lose the general election to me," said Pritzker.

Last week, Rauner began airing a 60-second ad featuring a portion of the tape where Blagojevich and Pritzker are heard talking about a possible appointment to the Attorney General post if Blagojevich would appoint Attorney General Lisa Madigan to the senate seat vacated by Barack Obama.

Rauner's campaign explained the decision to air the entire tape this way:

"It is in response to JB Pritzker's claim that last week's ad featuring his conversation with Blagojevich, in which his insider dealings were exposed, was 'selective editing.' That ad highlighted 60 unedited seconds taken straight from the Chicago Tribune reporting of the FBI wiretaps," the Rauner campaign said in a statement.

Pritzker was never accused of any wrongdoing and responded to the ad during a candidates forum Wednesday.

Before a Democratic candidate's forum at Access Living, Pritzker's chief rivals in the upcoming primary weighed in on the details in the wiretap and their implication in the governor's race.

"It just shows what a risk it would be for the Democratic Party to nominate a flawed candidate like JB Pritzker," said gubernatorial candidate Daniel Biss.

"JB's unfortunately emerging as the poster child for everything the Republicans say is wrong about Democratic politicians, the notion that, well, it's a combination of money and insiders who benefit," said gubernatorial candidate Chris Kennedy.

When Pritzker was asked Thursday whether he wished the conversation with Blagojevich never happened he repeatedly avoided a direct answer, but when pressed Prtizker said Blagojevich broke the trust of the people of Illinois and, in his words, is in prison where he belongs.

On Thursday, Pritzker's campaign communication director Galia Slayen issued the following statement: "Hundreds of people spoke to the governor at the time and whether Bruce Rauner chooses to buy a 60-second or even a 14-minute negative ad, the fact is JB Pritzker was accused of no wrongdoing. Bruce Rauner is desperately trying to interfere with the Democratic primary because he can't defend his failed record and because he doesn't want to face JB Pritzker in November."

In a release about the 14-minute ad, the Rauner campaign said "JB Pritzker cannot simply dismiss his conversation with a convicted former governor in which he lobbied for his own appointment to statewide political office and encouraged him to engage in a quid pro quo- especially in light of their well-documented decades-long cozy political friendship.

JB Pritzker is part of the corruption and cronyism that has plagued Illinois for decades. The people of Illinois deserve better."

The ads will air statewide this Saturday and Sunday according to Rauner's campaign.