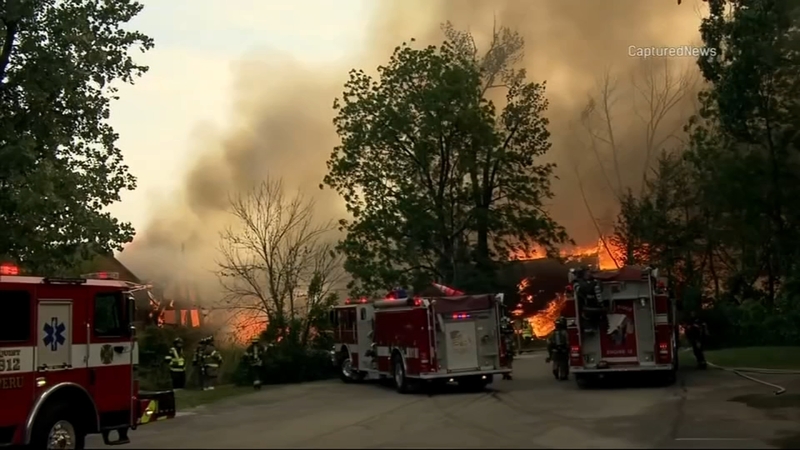 Fire crews remained on the scene overnight at Grand Bear Resort, putting out any hot spots. As of Tuesday morning, the fire appeared to no longer be a threat, but the damage it caused is massive.

The Utica Fire Department said it received a call about a porch fire at about 5:20 p.m. Monday.

Chopper 7HD flies above the damage from a massive fire at Grand Bear Resort.

The fire quickly spread to multiple buildings. At a press conference Tuesday morning, officials said seven cabin buildings were lost, with each building having four units. The fire was contained to the cabin and villa section of the resort, not the actual hotel and waterpark.

Paula Smith lost everything in the fire.

"The wind was so bad because it just happened like on the other side of ours, a couple away from us. It was just the wind blowing so hard yesterday, spreading it across," Smith said.

She and her young grandson just moved into their unit last week. In her car Tuesday morning, the belongings from a storage locker is all she has left.

The Utica Fire Department said it received a call about a porch fire at about 5:20 p.m. Monday. The fire quickly spread to multiple buildings

Sheila Brombos said she and her husband were making dinner when they smelled smoke.

"The next thing I know, I walked past the window to do laundry and I saw the white smoke pluming, and yelled at him to call 911 and I ran out," she said.

What they thought was their forever home is now down to ashes.

"It's gone. It's gone. All we have is the clothes we have on," she said. "It would've been four years in July. Just horrible."

But owners and residents are all grateful no one was hurt.

"Been together since we were 16 years old and we have each other. That's all that is important," Brombos said.

Mike Paitipilo owns a unit that was not damaged by the fire.

"When I got back there, there is no power, so I had to use the flashlight on my phone to go inside the house and grab my things," he said.

The cause of the fire is not known, but fire officials said Tuesday the fire does not appear to be suspicious. As of 8 p.m. Tuesday, all occupants had been allowed back into their homes.

More than 60 fire departments and around 200 firefighters responded to the fire.

The wind played a huge role in the spread of the flames, officials said.

"And all those embers were landing on all the other buildings and that's what caused it so quickly to have all those on fire," said Utica Assistant Fire Chief Drew Partain.

Fire not believed to be suspicious, fire officials say

A fire badly damaged a resort at Starved Rock.

The fire department said the fire was contained as of 9:10 p.m.

Grand Bear Resort covers a large amount of space and is comprised of multiple structures, including a 24,000 square foot indoor water park, grand lodge, villas and cabins for people to stay in, and bars and restaurants.

This is not the first fire at the resort. In January 2018 a fire at Grand Bear also caused significant damage.