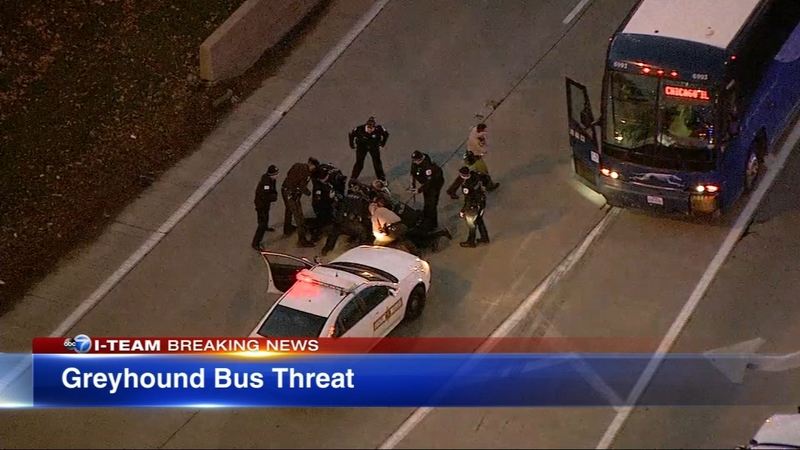 CHICAGO (WLS) -- A man was arrested on the inbound Kennedy Expressway Wednesday evening after he made a threat to blow up the Greyhound bus that he was aboard, police said. That threat was later found to be unsubstantiated, authorities said.

Illinois State Police said they received a call from a Greyhound bus driver who stated that a man on the southbound bus made a bomb threat. The bus had 17 passengers on board and was headed to Chicago from Milwaukee, according to a Greyhound spokesperson.

Aiesha Fields, who was traveling aboard the bus with five children, said the man had been rapping throughout the bus ride, including making troubling statements about "messing with" a 16-year-old girl and saying he would kill everyone on the bus. The driver stopped the bus twice throughout the trip to warn the man to quiet down, passengers said.

Fields said the rapping man then approached the driver and asked to get off the bus.

"He was just saying he was going to blow up the bus," said Valetta Campbell, another Greyhound passenger. "He wanted to blow everybody up on the bus. He don't like the president. He's got a problem with the government."

Chopper 7HD was flying over the Greyhound Bus near Ogden Avenue at about 4:35 p.m. and captured video of the dramatic arrest.

Police from city and state agencies responded to the scene and surrounded the bus. A state trooper boarded the bus and brought a man off. Numerous Chicago police and state troopers wrestled the man into custody about 4:45 p.m.

Passengers were in disbelief about what they were witnessing.

"I said, 'Am I going through a real-life 'Speed' here, the movie?'" said Jacob Sapf, another passenger on the bus. "I was wondering, you know, 'What's going on here?'"

"We just could not believe that was happening," Campbell said. "We was really getting scared, thinking that he has something on the bus to blow everybody up."

The bus was moved to an accident investigation site along the Kennedy Expressway. Passengers were safely escorted off the bus about 5 p.m.

A bomb dog swept the bus and did not find any explosives, Illinois State Police said.

"Safety is a cornerstone of our business and we treat any threat towards our passengers and/or employees seriously," the Greyhound spokesperson said in a statement. "We are fully cooperating with local law enforcement as they complete their investigations."

Fields said this experience was enough for her.

The bus was taken to Chicago Police First District headquarters at 17th and State Streets for further investigation.