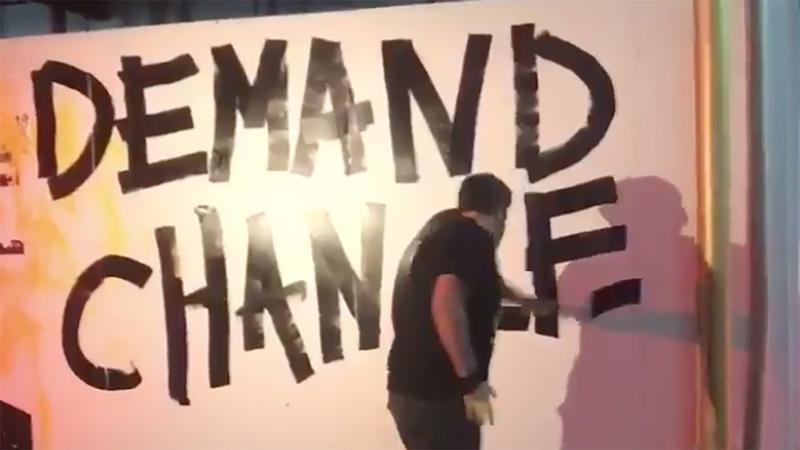 His son, Joaquin, was among 17 students and teachers killed Feb. 14 at Marjory Stoneman Douglas High School in Parkland, Florida. In heart-wrenching video shot recently by Joaquin's classmate Lex Michael, Oliver paints a mural in honor of his late son.

Oliver doesn't utter a word throughout the sobering 45-second clip, conveying his grief instead through his brushstrokes and body language.

His painting features a stylized version of a widely circulated photo of Joaquin accompanied by the phrase "We demand a change." It was adorned with flowers and later signed by Joaquin's classmates.

Oliver, too, left a poignant note for his late son: "Love you forever."

The mural was part of an art installation organized by Miami Heat player Dwyane Wade. Dubbed "Parkland 17," the installation featured various photographs and art displays honoring those killed in Stoneman Douglas, Michael told ABC. It's open for 17 hours this weekend.

Joaquin, 17 when he died, went by the nickname "Guac" because many people had trouble pronouncing his first name.

"He's just a goofball. He's the only kid you'd know that would dye his hair bleach-blond, walk around school, put some tiger stripes in and just be unique. He was a unique soul," his friend Tyra Hemans told the Associated Press.