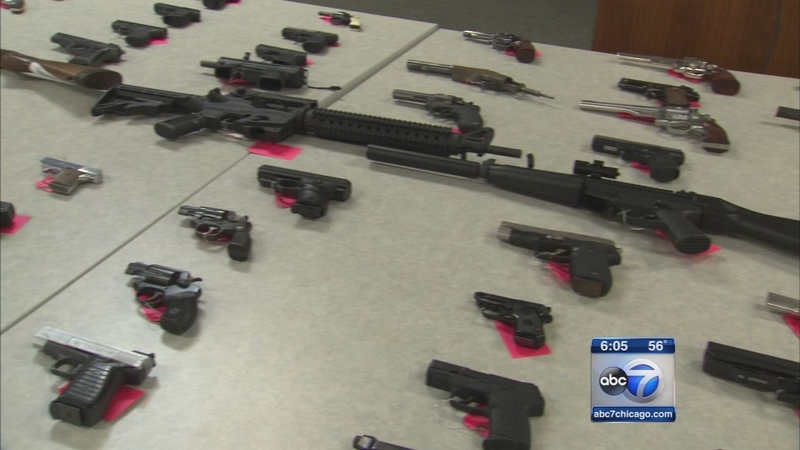 LYONS, Ill. (WLS) -- One Chicago suburb is trying to set new boundaries for its gun laws.

Authorities in Lyons, Ill., are voting on a proposal to control some sales at local gun stores after a lawsuit was filed against the community by Father Michael Pfleger and other gun control activists.

The Lyons Board of Trustees called special meeting to pass a gun sales ordinance to deal with the problem of straw purchasers, people who buy guns for other who may go on to commit a crime.

"I think we have to be proactive about making sure that guns aren't getting in the hands of wrong people," says Mayor Christopher Getty.

Lyons has one gun shop. The ordinance now requires the shop to record anyone buying more than one firearm a year and submit to random inspections by Cook County, which includes maintaining video surveillance at the point of sale and outside the gun shop.

"I'm so tired of the rhetoric," says Cook County Sheriff Tom Dart. "And the rhetoric, what has it gotten us? It hasn't gotten us anywhere. This is a real substantive step where a gun shop and law enforcement is going to work together to do the best they can.

The Village created this ordinance after a lawsuit was filed against three suburbs: Lyons, Lincolnwood and Riverdale

Father Pfleger has led protests against some suburban gun shops, and said of the new ordinance in Lyons, he is "grateful to Lyons for stepping up to protect lives. Now it's time for the others to do the same.

Among those who brought the lawsuit with Father Pfleger is Pam Bosley who lost her son to gun violence.

"The pain is never going to leave. The pain is actually horrible, every day," she says.

On the same day Lyons created the new gun law, she visited a memorial for her son Terrell who was shot and killed in 2006.

"Hopefully we have others who follow them. Hopefully we can get public safety on the street so our children can walk up and down the street and enjoy life again," Bosley says.

With this law, Lyons is released from the lawsuit. It proceeds against Lincolnwood and Riverdale.