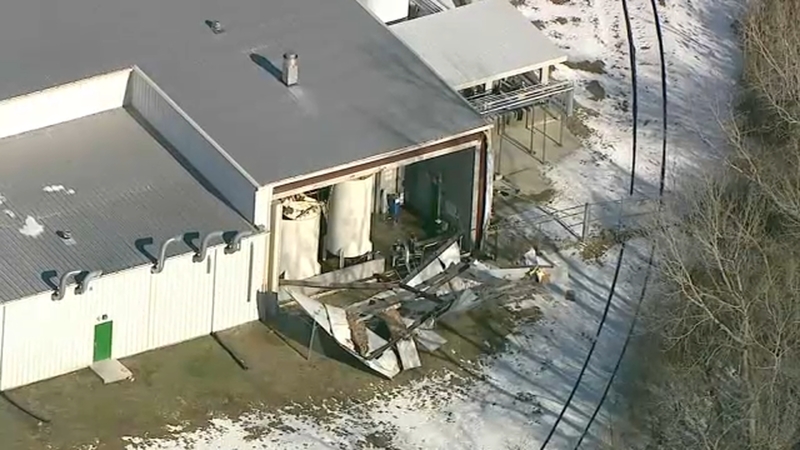 HAMPSHIRE, Ill. (WLS) -- One person was killed and another was critically injured in a chemical explosion Friday morning at a construction products manufacturer in Hampshire, a village in Kane County, according to Hampshire Fire District Fire Chief Trevor Herrmann.

Metal debris, mangled on the ground as authorities canvassed the scene.

The explosion was so loud, it was heard by neighbors nearly a mile away.

"The whole foundation of the house just shook," said Ed Martin, who lives in Hampshire. "I thought it was somebody's house. We looked around the neighborhood. That's what your natural reaction would be. And I did tell my son before he left to work, 'I hope something didn't happen back here in the Industrial Park.'"

The worker who was killed has been identified as 55-year-old Wuilmer Gavigia.

"It's extremely sad," Martin said. "I've lived here for 19 years and nothing like this has ever happened."

This isn't the first time authorities were brought to this factory. ABC7 has learned the company was cited by OSHA at least twice in the last five years.

According to documents, in 2017 an employee was cleaning a Teflon glide roller when they were pulled into the machine, fracturing an arm and receiving third degree burns.

In 2019, another employee was cleaning the top of a tank and fell about 10 feet, injuring his head.

Now, another investigation underway, as neighbors offer support to those reeling from the blast.

"Our thoughts and prayers are with you. It's very, very sad," Martin said.

An autopsy will be performed on Gavigia's body on Monday. The cause of the explosion is under investigation.

Hampshire is located about 50 miles west of Chicago in Kane County.