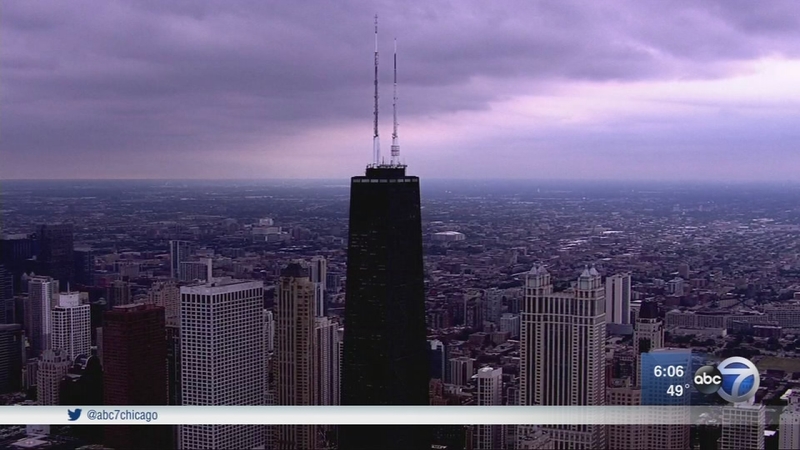 CHICAGO (WLS) -- A few days after the name of the John Hancock Center was changed, an old concern has surfaced: lack of fire sprinklers in the residential portion of the skyscraper.

The I-Team has learned that fires broke out in two different apartments on Sunday at the 875 N. Michigan Ave. building. The separate fires were in units on distant floors, hours apart.

A 32-year-old personal trainer was seriously injured early Sunday morning during a fire in his high-rise apartment. Chicago fire department officials told the I-Team Tuesday that it began in the kitchen of the 52nd floor studio unit, near the stove.

The resident was initially taken to Northwestern hospital in serious condition and has since been transferred to the intensive care unit of another facility.

A second fire, later Sunday morning, occurred in a unit on the 69th floor according to Chicago fire department officials. Authorities said a "microwave oven caused fire" at about 11:15 a.m. No injuries were reported in that fire.

But in both fires, there were no ceiling sprinklers to douse the flames before firefighters arrived.

The fires on Sunday have reignited criticism of Chicago codes that do not require sprinklers in the former Hancock Center.

"They keep rolling the dice on whether a fire is going to be deadly or not," said Tom Lia, executive director of the nonprofit Northern Illinois Fire Sprinkler Advisory Board (NIFSAB).

"There's no good excuse for lacking sprinklers in Chicago," Lia told the I-Team in an interview from the group's Orland Park headquarters.

The reason that the former Hancock building, now known as 875 N. Michigan Avenue, doesn't have sprinklers in its 700 residential units is because the city doesn't require them.

As the I-Team has previously reported, when the 100-floor Hancock Center was built in 1965 there was no hi-rise sprinkler requirement. The current ordinance exempts residential skyscrapers built before 1975 from having to install sprinklers. So 875 N. Michigan doesn't have sprinklers in residential units from the 44th to the 92nd floors, home to nearly 1,500 residents.

There are hundreds of other residential buildings in Chicago that do not have sprinklers, Lia said.

Instead, the buildings must satisfy city "life safety" requirements that include alarm systems and fire rated doors among many other items on a long checklist.

Chicago Fire Department spokesman Larry Langford said Tuesday, "The building at 875 North Michigan is in compliance with City of Chicago Life Safety Ordinance, which ensures the building systems and components in residential buildings are designed to protect life in the event of a fire."

According to Langford, "fire detection devices, such as the approved smoke detector system in place at 875 North Michigan, can provide a sufficient warning to allow for occupants to evacuate a unit long before the ambient temperature would reach 165 degrees, the point that would cause water to flow from a sprinkler. Once escape is made, a properly rated and operating door such as those installed at this building will generally confine the fire to the unit of origin until extinguished by fire personnel."

Regardless, without sprinklers, on Sunday the apartment burned until Chicago fire teams could get to the 52nd floor unit where they found the injured resident.

"It's very serious and very difficult for us to get equipment and manpower, tools, all that up there. We're fighting smoke conditions," said Deputy District Fire Chief Jeffrey Horan at the scene on Sunday. "Were walking up a lot of stairs with all our equipment 'cause we don't go to the fire floor we go two or three floors below the fire floors."

The fire was contained to one unit, according to authorities. The residential entrance is at 175 E. Delaware Place.

The commercial sections of the building do have up-to-date sprinklers, according to city officials.

Earlier this month, part of that sprinkler system was activated when a car caught on fire inside the adjacent Hancock parking garage. The 7th floor fire was "kept in check," according to a CFD commander.

The early-Sunday residential fire, one week later, had a less fortunate ending with the resident injury.

The former Hancock Center is doing nothing wrong under the law by existing without sprinklers. On Tuesday a Chicago fire department spokesman said sprinklers might not have mattered in either of Sunday's fires-because the fires were probably too small and not hot enough to trigger sprinklers even if they had been in place.

Last weekend wasn't the first time someone was injured in an upper floor living unit. In 2015 five people were injured during a fire that began from a candle in a bedroom of a 50th floor condo. The heat was so intense that windows were blown out. A Chicago police officer was among the injured.

"You remember the horrors of 9/11 where people were jumping out the windows, I didn't know if that was going to happen to us," said then-resident Thom Jenkins after the 2015 fire.

During that 2015 incident, the I-Team reported that parts of the Hancock fire safety system didn't work. Some residents learned of the fire in their own building from news reports or calls from family members across the country.

The commercial-side building owner, Hearn Company, did not respond to messages left by the I-Team and neither did Sudler Property Management that oversees the condominium side.