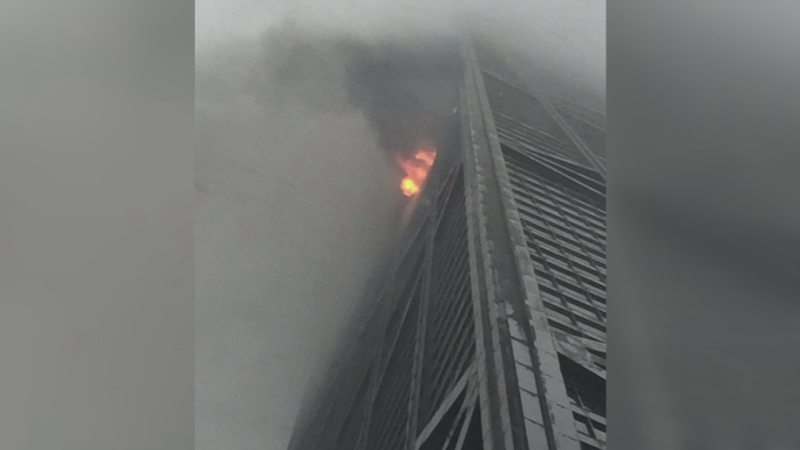 CHICAGO (WLS) -- When fire broke out at the iconic Hancock Tower on North Michigan Avenue, parts of the Hancock fire safety system didn't work. The I-Team has learned tonight that city officials are taking no enforcement action against the Hancock, leaving residents to wonder whether they are in danger.

The 50th floor on fire from a candle in a bedroom; heat so high windows were blown out. Five people were hurt, including a Chicago police officer.

"You remember the horrors of 9/11 where people were jumping out the windows, I didn't know if that was going to happen to us," says Thom Jenkins, Hancock resident.

Residents here say they don't know much more about their safety in the next emergency even though the company that manages Hancock Residential gave them their own analysis of the fire. Sudler management admitted the fire safety communications system was in "test mode" and didn't alert the fire department that there was a fire and the "all call" system failed, preventing firefighters on the scene from communicating with residents.

"We didn't know what to do. There was no communication," Jenkins says.

Sudler reports the Hancock's smoke towers failed to have the smoke "fully dissipate through the smoke shaft and create safe passage in the stairwells."

"I don't feel confident that it will work in the future unless we get some answers as to why it failed," says Hancock resident Dennis Kmetz.

Sudler is residents "there was no failure of the fire alarm." The I-Team spoke to more than a dozen residents and all said there was no alarm.

Many residents learned of the fire from outsiders; Ruth Hosek from her son in Seattle.

"He called and said you have a fire at the Hancock and I said, what are you talking about?" Hosek says.

Hancock residential floors have no sprinklers -- they're not required because the building predates the sprinkler law. Chicago Building Department officials tell the I-Team they have met with Hancock managers to ensure life safety systems work and the city has "increased monitoring of the building."

"The majority of residents are not happy," says Jenkins.

Sudler hasn't answered their questions or the I-Team's.

In a statement the company said "the safety and well-being of the residents and facilities in our managed properties is of the upmost importance to us" and that the Hancock is in compliance.

It was also "in compliance" last November 21, when parts of the fire safety system didn't perform.

But the city isn't charging or fining them for any of those failures.

The I-Team found Hancock residents have been given conflicting safety information. A fire department commander recently told them the safest place during a fire is in their apartments.

"Now your external door going into that hallway, that has protection factors in it. It is rated up to about 45 minutes. If that door were closed, if there is a fire outside in that hallway, it would take 45 minutes for a fire like a flame thrower burning at that door to take that door down. That is a requirement by city code," said Chicago Fire Commander Walter Schroeder during a "Residential Life Safety Presentation" on January 23.

But the City Buildings Department tells us those apartment entry doors are actually fire-rated less than half that time. The doors are good for only 20 minutes, which also meets city code. The Chicago Fire Department now says that "commander was mistaken and now has the correct information."

And the I-Team found other entry door problems. Residents showed us their concerns that not all automatically latch and some have large gaps at the bottom-both of which are code violations.

But Sudler disagrees, saying residential doors have self-closure devices so they close and latch which therefore complies "with city code."

There are more than 700 condos in the Hancock building. Residents we interviewed want an independent analysis of last November's fire to determine why so many building safety systems failed. Perhaps more concerning is that even if they all worked, Chicago's new fire safety code only "provides a minimal level of safety from fire" at residential high-rises.

Following the fire in the John Hancock building on November 21, 2015, officials from the Chicago Fire Department and the Department of Buildings met with John Hancock building managers to reinforce the city mandate that they have all life safety systems in proper working order at all times, and that all building managers and residents must adhere to emergency fire protocols for high-rise buildings. As a result of this incident the Chicago Fire Department and Department of Buildings have increased monitoring of the building. Any failure to comply with the city of Chicago's fire safety requirements is unacceptable.

Background:
After 1957, all entryway doors were required to be 1-3/4 inch solid flush panel door with a rebated frame of solid material 1-3/4 inch thick or metal frames of not less than number 16 gauge. The John Hancock building began construction in 1965.

Only the residential portion of the building is subject to the Life Safety ordinance, the commercial portion is required to install sprinklers. However, the city completed inspections of all building floors prior to the approval of the life safety inspection for the residential portion of the building. Inspectors confirmed that many floors have a working sprinkler system and the remaining floors are required to install sprinklers by the January 1, 2017 deadline. Relevant dates: