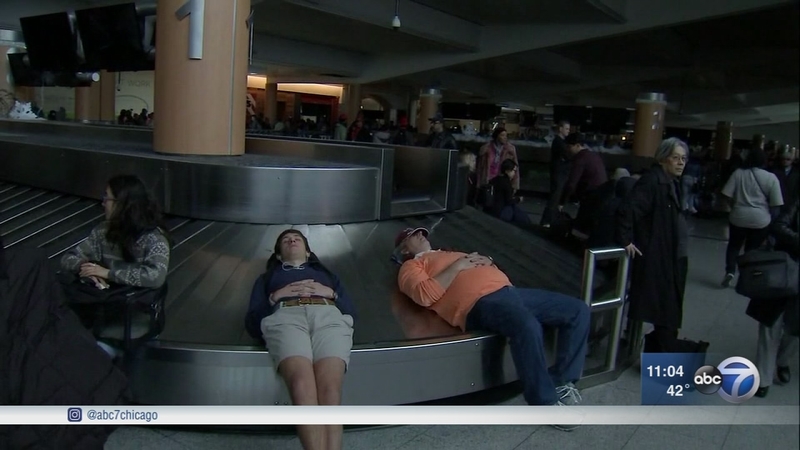 CHICAGO (WLS) -- Power has been restored to the world's busiest airport in Atlanta, but there are still travel complications Monday.

Delta Airlines said they were cancelling at least 300 flights today because of Sunday's blackout at Hartsfield-Jackson Airport.

Hundreds of O'Hare and Midway passengers were faced with cancelled flights Sunday and again Monday morning. Some passengers were still struggling to understand how a power outage in Atlanta is affecting their plans a day later.

Traveling with kids is hard enough. But Atlanta-native Keri Dziuban said "difficult" has taken on a whole new meaning.

"We were booked at three different flights though out the day yesterday each one getting canceled about 20 minutes apart and then finally everything to Atlanta was shut down," said Dziuban.

Atlanta's Hartsfield-Jackson Airport was shut down after a fire in an underground electrical facility led to an instant blackout. Delta, with a major hub in Atlanta, is the airline hardest hit.

According to site Flightaware, more than 400 flights were canceled on Monday.

"Now it's turned into this whole dramatic episode where I'm trapped in Chicago and I'm just trying to make my way out of here," Edwards said.

"Then I got up at about 3:30 this morning and found out that was canceled," Edwards said.

But some flights to Atlanta still managed to make it out on-time. Kiki Kouris was surprised that she got her boarding pass.

But she's not quite sure what she'll be flying into.

"We'll see when I get there, I think I'm flying into quick a mess so we'll see how it goes," Kouris said.

Delta tweeted out earlier Monday morning that their Atlanta flight schedule should return to normal by Monday afternoon.