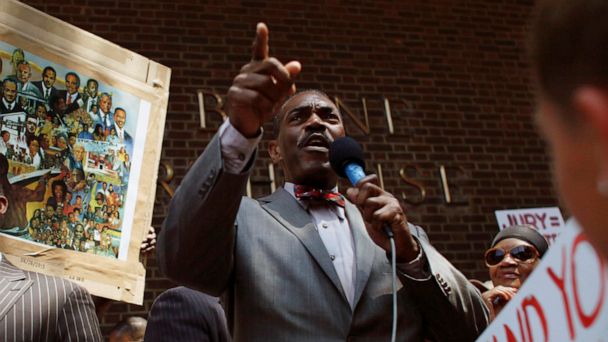 Elected officials and community activists are calling on the head of Philadelphia's NAACP branch to resign after he shared an anti-Semitic meme on social media.

Minister Rodney Muhammad has come under fire for a July 24 Facebook post that had images of Ice Cube, Philadelphia Eagles player DeSean Jackson and Nick Cannon, who have made anti-Semitic comments online over the last few weeks.


The post included a Jewish caricature and a quote seemingly supporting anti-Semitic statements by others.

Muhammad, a minister with the Nation of Islam, took down the post and issued a statement on Monday contending he wanted "to start a dialogue around criticism and understanding."

"I later learned that not only was the quote I used misattributed to the philosopher Francois Voltaire, but in fact, the quote and image had been used previously by white supremacists," he said. "It was never my intention to offend anyone or cause any hurt."

Several elected leaders and activists, however, said Muhammad's explanation was not good enough and criticized him for posting the image in the first place. The Jewish Federation of Greater Philadelphia also claimed that the Facebook page associated with the mosque where Muhammad ministers has other anti-Semitic posts.


"Sharing this type of racist content is unacceptable -- especially from a civic leader," Wolf tweeted.

During a video meeting organized by the Jewish Federation of Greater Philadelphia, 13 Black and Jewish elected officials condemned Muhammad, and some called for his resignation. State Sen. Anthony Hardy Williams said he would not work with the NAACP branch if Muhammad still led it.

"I cannot accept anything less," he said.

The NAACP released a statement Friday acknowledging Muhammad's post was offensive and that the organization denounces all forms of hatred.


"Hate speech has no place at the NAACP, and such language and imagery are reprehensible," the organization said.

The NAACP added that President Derek Johnson and Muhammad will meet with faith and community leaders over the next few weeks to "listen, open a dialogue, and continue the educational conversations needed to strengthen our communities and move forward."

Laura Frank, a spokeswoman for the Jewish Federation of Greater Philadelphia, told ABC News in a statement that the organization wants him fired.

"Our current statements calling for his removal from the position and outrage for the anti-Semitic posts made on his page, and on the page of his mosque, still stand," she said in a statement.
Report a correction or typo
Related topics:
abc newsnational
Copyright © 2020 ABC News Internet Ventures.
More Videos
From CNN Newsource affiliates
TOP STORIES