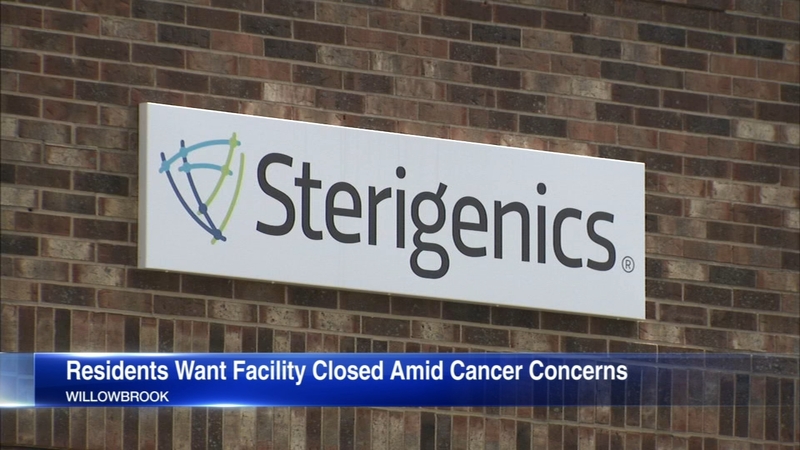 Willowbrook residents call for Sterigenics to leave over cancer concerns

WILLOWBROOK, Ill. (WLS) -- Residents were angry and demanded answers Wednesday night after the release of a federal report showed a company may be releasing cancer-causing chemicals into the air.

"We want you out! Goodbye!" one resident yelled.

Hundreds of residents are upset about a federal report finding company Sterigenics, which has been in the south suburb since 1984, is releasing a toxin that could cause cancer.

"Even though we thought the risk was actionable it was not one that indicated an immediate health threat or that there was an emergency situation," said Mark Johnson of the Agency for Toxic Substances and Disease Registry.

Data for the report was gathered in 2014 after changes in EPA guidelines for ethylene oxide exposure.

"And so all of the sudden exposures which looked very safe for the surrounding communities may not be so safe, so we're trying to understand," said U.S. Congressman Bill Foster (D-11th District).

The meeting at times intense and emotional for people who just want answers and wonder if toxins have hurt their health.

"How many people that have lived in this area for 33 years know somebody or has cancer, has died from cancer has Leukemia please standup because that is one of your questions of how many people have it," one resident said at the meeting.

In a written statement released by Sterigenics parent company Sotera Health said, "Willowbrook's air pollution control equipment is state-of-the-art and the facility achieves and exceeds all compliance goals set by the EPA and Illinois EPA for air emission reductions."