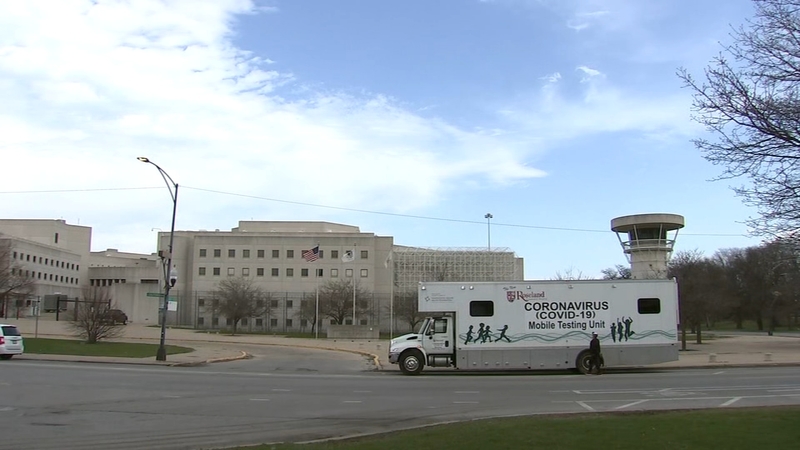 CHICAGO (WLS) -- Even as more prisoners are being released in efforts to stop the spread of COVID-19, there are concerns that some of the nearly 50 state prisons and 100 county jails have become islands of infection, with the percentage of sick prisoners far more than on the outside.

"So many inmates are scared, shaky, a lot of them are sick," said former Cook County jail detainee Mik Youkhanna.

The 42-year-old was released from the Cook County jail last week to await his next court date on criminal trespass and criminal damage charges.

In February, Youkhanna said he got sick at the jail, was examined by a jailhouse doctor, then isolated for several days. But the convicted felon said all prisoners need to be tested for COVD-19.

"Every day it's just getting worse. And really the inmates are terrified and that's what made me push you to call you guys," Youkhanna told the I-Team. "It's only gonna get worse if they don't proceed with the testing."

The I-Team has learned a mobile unit was at the jail Monday testing 20 correctional officers for coronavirus, part of a trial run for Wednesday's planned launch of a new effort to test thousands of jail personnel. Seventy-eight staff at the jail have already tested positive for COVID-19.

"We have people that's in jail and their lives are in danger. The living conditions in the county jail are not suitable for human beings. People are living like animals," said advocate Flonard Wrencher, Chicago Community Bond Fund.

Demille Tillman, 30, has been locked up in the Cook County Jail for the past year on several gun charges. His girlfriend and mother of their five daughters is worried about the jail conditions.
"All the thing they're doing is taking their temperature. They don't have the proper cleaning supplies," said girlfriend Tianna Henigan. "They're told to use their bar of soap so that they use to wash up their body their face and stuff so sanitize their area but no alcohol, bleach nothing is given and I don't understand why that's not happening."

Given the unprecedented nature of this global pandemic, the Cook County Sheriff's Office has been and will continue to aggressively do all it can to protect staff and detainees. That includes the mass distribution of PPE, soap and sanitizer, the building of a 500-bed quarantine facility and comprehensive screening and testing. The Office has also been working with the judiciary and prosecutors to release vulnerable detainees.

We are disappointed the Plaintiffs' attorneys did not take the time to understand or discuss with us the Cook County Jail's comprehensive response to this viral pandemic crisis. We talked to the lawyers prior to the filing of this lawsuit to understand their concerns, offered to explain all that our frontline staff and subject matter experts are doing to aggressively protect officers and detainees and to explore a way we could work together to further those efforts. Unfortunately, they instead filed this uninformed suit which reflects a clear misunderstanding of efforts being made to respond to this crisis. In turn, we must expend resources to explain that much of what their complaint requests is already in place. This is counterproductive to our mutual goal and is simply not the way to address the pandemic.

A spokesperson for the Cook County State's Attorney's office said they "continue to urgently review cases in the interest of public health and safety" and that jail population is down 19 percent since March 16.

Nearly 500 inmates have been released from Illinois state prisons in an effort to reduce prison population, according to a spokesperson for the Illinois Department of Corrections.