Prescription for a miracle: Police family gets help from I-Team 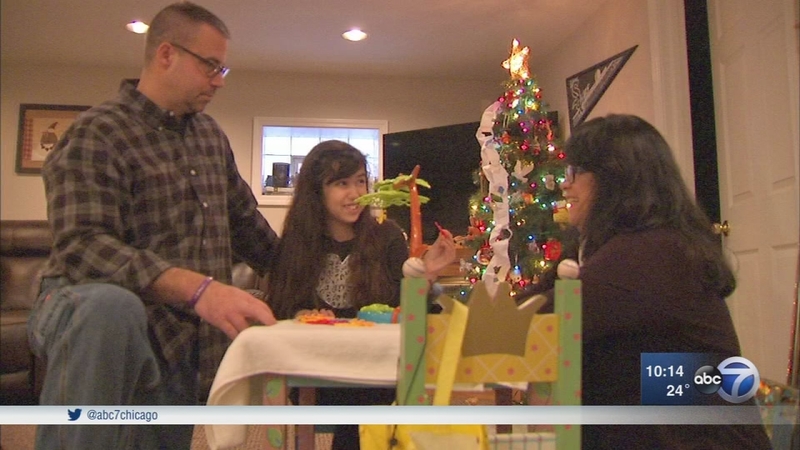 Prescription for a miracle: Police family gets help from I-Team

CHICAGO (WLS) -- Call it the "Miracle on LaSalle Street." City Hall and one of its prescription providers had a change of heart after the I-Team began looking into a family's struggle with medication prices.

A few weeks ago the I-Team began looking into a Chicago police family that was to be crippled by the cost of a daughter's medication, and last week when ABC 7 initially planned to air the story suddenly everything changed.

Isabella Oswald is having a seizure, one her parents said is mild compared to the others. She has epilepsy and cognitive delays.

Her worst case scenario weighs on her parents. Eric Oswald is a detective with the Chicago Police Department and his wife Maria is a now-retired CPD officer.

"She could die from these seizures," Maria said.

The frequency of Isabella's seizures has dramatically decreased. Her parents credit a combination of brand name drugs: Lamictal, Neurontin and Depakote.

"It's an 11 year old girl, who's come a very long way and has had a lot of struggles in her little life, but we are at a better place and it's because of those drugs," said Maria.

That "better place' was threatened when the family was put on notice in September that those drugs would some come with a hefty out-of-pocket price tag.

Others could be facing the same sticker shock as prescription insurers are kicking more brand name drugs off their lists of approved medications in favor of generics.

"2017 is really going to surprise people. I started to take a look at formularies myself and I'm seeing more and more brand name drugs being dropped or being put into prior authorization," said Barbara Otto, CEO of Health & Disability Advocates.

Many patients do well on generics and have no problem switching, but for some with precarious medical conditions even the slightest variation can cause problems.

"This is a child who is so exquisitely sensitive to these medications," said Dr. Nishant Shah, pediatric neurologist at Advocate Children's Hospital.

The Oswalds use City of Chicago private health insurance and the pharmacy benefits manager is CVS Caremark. They said the price for keeping their daughter on the doctor-recommended brand name drugs could cost them thousands of dollars each month. It's a price tag the family can't easily afford, but they also said they can't afford to risk their daughter's health.

"We've tried every combination. This is the best, best control she's had in years," Maria said.

Desperate, the family filed an emergency appeal with the city's benefits committee. On Nov. 8, armed with a letter from her pediatric neurologist warning a change in medication to the generic brands would put Isabella at risk, Maria went before the panel.

"I had to tell her story to strangers and beg strangers to please make the drug affordable," she said.

The appeal was denied. The City said there was no provision that would allow the waiving of the penalty.

"So before I went in the door the decision had already been made," Maria said.

Crushed, the Oswalds contacted the I-Team, who then contacted the City and CVS Caremark. The day the I-Team's story was originally scheduled to air, the Oswalds received a phone call with news that starting in January they would be able to get the drugs at the co-pay price: $45 a month for each.

The miracle? Beginning in January the City is adding a "prior authorization" process. That updated clinical process, according to the company, will give workers and their physicians the opportunity to address the medical need to stay on a particular drug.

And while a city spokesperson insisted nothing special was done for the Oswalds, in an email to the I-Team CVS Caremark had a different explanation.

"After your station brought this matter to our attention we reviewed the situation with our client," CVS officials said in a statement, "and it was decided to expedite the new process that takes effect next month for this particular case."

The Oswalds are relieved and call it a Christmas miracle. They want the system to change, not just for their family but for others.

City officials said letters went out to uniform police employees and doctors in November concerning upcoming changes in the prescription plan. But if city officials knew the plan was changing in January, the Oswalds said they never should have been put through an appeals process they were destined to lose.