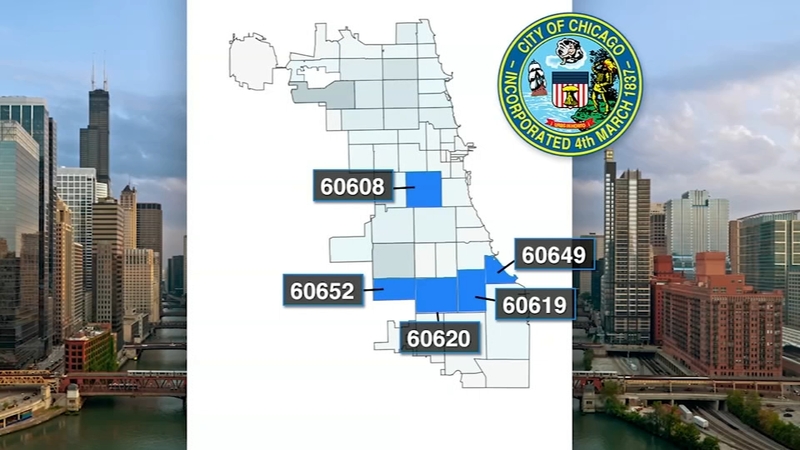 CHICAGO (WLS) -- The United Center mass vaccination site fully opened for COVID vaccine appointments Wednesday, but there was more early confusion with some people waiting almost an hour to get checked in.

Tens of thousands of appointments are open, but they are not available to be booked. Instead, they are being held for five specific Chicago zip codes to ensure that the doses are distributed to equitably to the city's most vulnerable populations.

The rest have been reset after most senior appointments went to people outside the city.

"We have to do this in a way that is consistent with equity, and that's critically important," Mayor Lori Lightfoot said.

The city has reached out to grassroots organizations that operate within Pilsen to help reassure people and get them registered at the United Center.

With its heavily immigrant, primarily Latinx community, Pilsen lies within one of the five zip codes the City of Chicago has designated to receive priority vaccine access.

"Far, sometimes for people, is relative," said 25th Ward Ald. Byron Sigcho-Lopez. "For communities like ours, immigrant communities, vaccination in the neighborhood is critical."

Pilsen resident Angelica Cruz saw the flyer with the link to sign up on Facebook Wednesday morning. It was posted by someone she knew and trusted.

"They just ask for your name, your date of birth and where you live just to verify that you're in that zip code and right away you get an email telling you that you've gotten that appointment," Cruz said.

Direct outreach is how the city is relying on getting the word out. In Cruz's case, it was Pilsen's Resurrection Project who shared the information with her.

"We have a network of community navigators, or promotoras, and what we did was that we immediately let them know, send them the link, this is the information. This is the code you need, all in Spanish so they could quickly mobilize and let everyone in their own networks know," said Erendira Rendón, The Resurrection Project.

Trust is key. Vaccine hesitancy by Black and Latinx communities continues to be a problem. Language barriers and outright fear of those who are running the United Center are one of the main issues that continue to plague the effort to vaccinate immigrants, in particular.

"There's been a lot of apprehension to go to those mass vaccination sites mostly because of the military presence," said Esther Corpuz, Alivio Medical Center. "And questions in their minds as to whether they are safe there."

The United Center had its soft opening on Tuesday and opened fully for all booked appointments on Wednesday.

Jeff Ginex got his shot at the UC Wednesday, but Tuesday night he got a message saying he canceled his appointment. However, he never did, so he came out anyway.

"You know everything is goofed up now, you just roll with the punches," Ginex said.

Jim Hubler, who got his shot Wednesday, said while the eligibility guidelines keep shifting, he's cutting government officials some slack.

"I'm frustrated but I also appreciate the magnitude of the problem and the fact that it's the first time that they're doing this and there's issues of getting the vaccine," Hubler said.

How many people in your area are hesitant to get the vaccine?
More Videos
From CNN Newsource affiliates
TOP STORIES