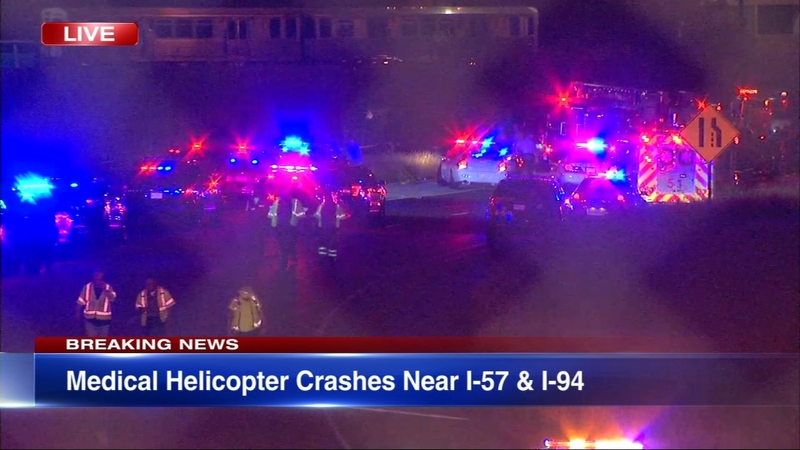 Medical helicopter crashes on South Side

CHICAGO (WLS) -- A medical helicopter crashed Saturday night near the I-94 and I-57 junction on Chicago's Far South Side.

Four occupants of the air ambulance were taken to the hospital. One person was in critical condition and the other three were in serious condition, according to the Chicago Fire Department

One of the occupants was a patient en route to a local hospital. The others were a pilot and two crew members. Their ages and genders were not immediately released. Two of the patients were taken to Advocate Christ Medical Center and the other two were taken to the University of Chicago Hospital.

The crash occurred at about 9:15 p.m. near the expressways, but landed on a grassy area. The chopper landed on its belly, about 2,000 feet from a CTA station. Authorities praised the pilot for strategically landing the chopper to avoid other potential injuries.

Witnesses said they saw the helicopter spiraling out of control and on fire before it crashed. The pilot had issued a mayday call before the crash.

It was immediately unknown where the helicopter was coming from, but Chicago fire officials said it was headed to Gary Airport. The cause of the crash was also not known.

A medical helicopter crashed near I-94 and I-57 on Chicago's South Side.