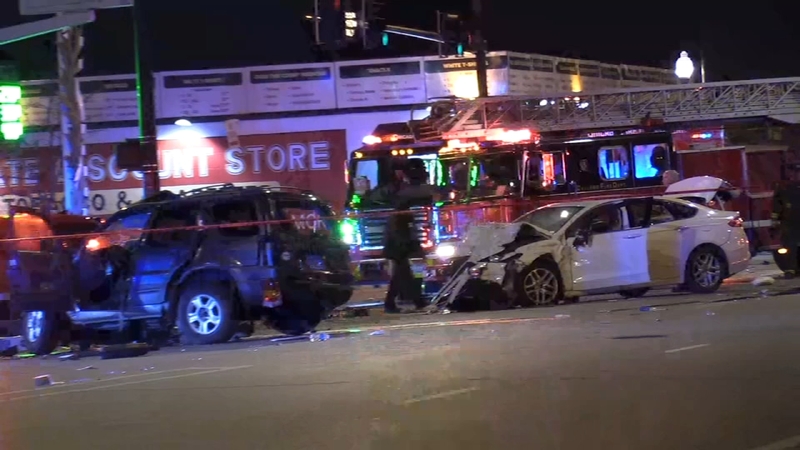 CHICAGO (WLS) -- Two men were killed in a fatal hit-and-run this week on Chicago's South Side, and now the family of one of the men is questioning the events that led up to the crash.

James Moore, 42, and Jerome Clopton, 35, were killed in a crash early Thursday at 71st and State Street. Both men were heading home from work when the crash happened.

An Illinois State Police trooper was put on administrative duty in connection with the incident as the investigation continues. Surveillance video shows a state police vehicle driving into the intersection just seconds after the crash.

Family members said they believe the video shows that the trooper was pursing a stolen white sedan when it crashed into the victims' dark-colored SUV.

The Chicago Police Department is investigating.

However, Illinois State Police tell a different story. They say there was no pursuit from the expressway just an attempt at a traffic stop.

In a statement, an ISP spokeswoman said that the trooper first saw the suspect's vehicle speeding through a construction zone on the Dan Ryan Expressway. Then, the trooper attempted a traffic stop, putting their emergency lights on until the vehicle exited the expressway. The trooper approached the scene of the crash to catch the suspect who had fled the scene.