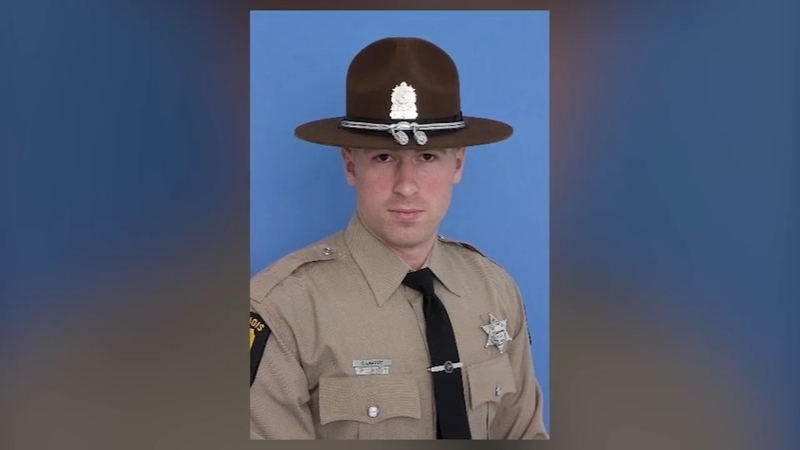 HIGHLAND PARK, Ill. (WLS) -- Hockey players are skating to honor a fallen Illinois State Police trooper and to bring attention to Scott's Law in hopes of preventing others from losing loved ones to avoidable tragedies.

The idea for the fundraiser came from three high school hockey players who drove by the scene of the crash that killed Illinois State Police Trooper Chris Lambert in January.

"When we drove by, we could just almost see the magnitude of what was going on," said Sam Shachtman. "When we were on our way back, that is when we noticed that it was something big."

The 34-year-old trooper, who was also an Army veteran, father and loving husband, was killed while helping another family who had been involved in a crash on the side of I-294, near Willow Road in Northbrook.

He was hit moments after he got out of the car to investigate.

"We found out the next morning that a state trooper was killed," said Parker Hara, one of the event's organizers. "He was also a Highland Park resident and he was helping a hockey family when he was struck."

Hara said it was "a personal story for us because that could have been us. They were on their way to a hockey game just like us."

Scott's Law requires drivers to slow down and change lanes safely when approaching any vehicle that has its hazard lights on.

Hara said they want to "educate as many people as we can about Scott's Law and the importance of it."

Just this year, Illinois State Police said that 23 troopers have been struck while pulled over on the side of Illinois highways. Four of those troopers have died.

Police are working to enforce the penalties for those who break the law.

"It can be from $100 to $10,000, depending on the severity of the accident. If someone is hit or killed," said Illinois State Police Trooper Woodrow Montgomery.

Shachtman said, "If everyone just slowed down and moved over, it would be zero struck and zero killed."

The work doesn't stop at the rink either.