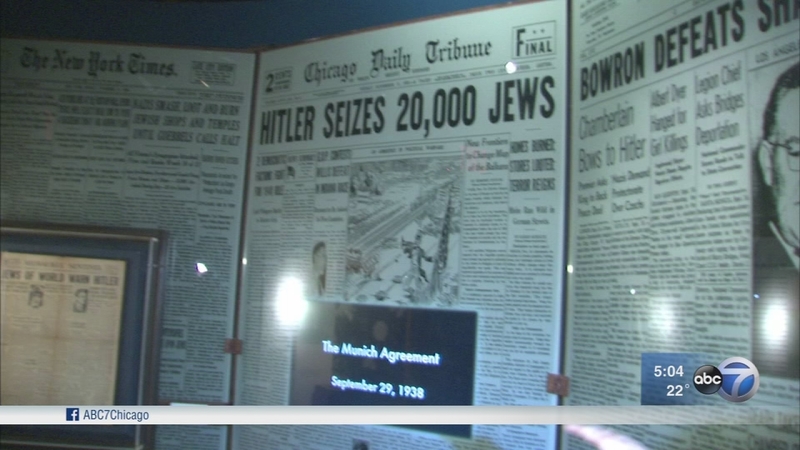 SKOKIE, Ill. (WLS) -- Holocaust survivors are concerned about the new refugee ban signed by President Donald Trump. They warn that the policy stopping immigration from seven Muslim-majority countries could result in lives being lost.

They're in their 80s now, but they were just children when their families were taken away, and through grit and, perhaps, some luck along the way they escaped to America instead of perishing in the Warsaw Ghetto or the gas chambers of Auchwitz.

Thursday at the Illinois Holocaust Museum in Skokie, these survivors took great pains to stay above politics as they spoke of their concern for the refugees now banned from this country.

"I strongly believe that the souls of my parents and my family are here," said Aaron Elster as he gestured to the wall of names in the museum.

"You start off by classifying people as a certain type and then you give them a name, and then it starts. They are not really people, they are less than people, what the hell do we want them here for?" Elster said.

The U.S. had a similarly restrictive policy for Jewish refugees during the Holocaust. The reasons for restricting visas and turning away refugees were similar to today's - politicians and citizens feared that Nazis would smuggle in spies and sabateurs, and feared fleeing Jews would be pressured into working as double agents in Germany. In 1939, America turned away a boat of over 900 Jewish refugees, sending them back to Europe. Only slightly more than half of them survived. The United States did not relax those policies and begin rescuing European Jews until 1944.

Elster his in the attic of a polish barn for two years before being rescued and making his way to Chicago. His entire family was wiped out either in the Warsaw Ghetto, or the gas chambers.

"A half a million people in a small area, that in itself made people die," he said of the Ghetto.

Standing in front of a real train car that took victims to Auchwitz, Frtzie Fritzshal said she is speaking out now because she remembers what it was like to be inside one of them, separated from family. She was just 13 years old.

Fritzie said that because nobody wanted them, her entire family was killed.

"We have to feel safe and secure. In recent days, we have begun to take necessary action to achieve that goal. Our nation has the most generous immigration system in the world. But these are those and there are those that would exploit that generosity to undermine the values that we hold so dear. We need security," he said.