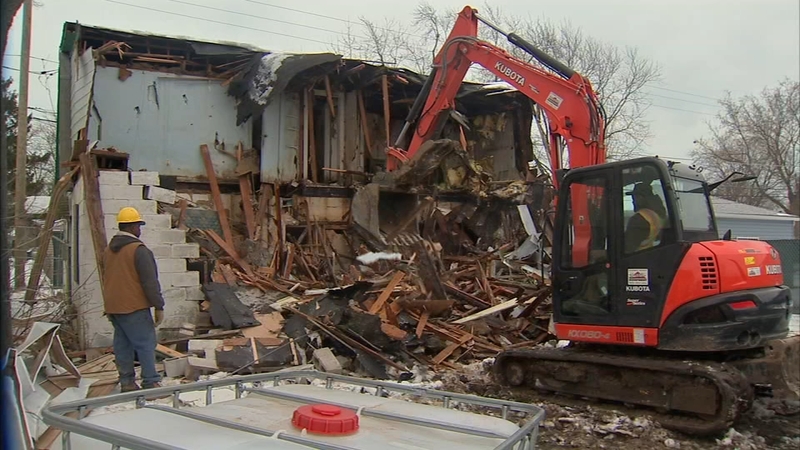 NORTH CHICAGO, Ill. (WLS) -- A program in a far north suburb is tearing down vacant properties in an effort to boost home values and promote safety.

The North Chicago initiative, known as the Blighted Properties Program, targets vacant and abandoned properties as the city continues to battle urban blight.

The program started in 2017 and since then, there have been 22 demolitions.

On Thursday, crews were taking down a dilapidated house on Elizabeth Street. It's the first of at least a dozen demolitions planned for this year.

"What we want to do is not just rid of the blight, but also bring these properties back into productive use," said Victor Barrera, director of economic and community development in North Chicago. "We have seen 70% increase in the property values here in North Chicago."

According to at least one online real estate marketplace, the median home value in North Chicago is just over $108,000 and it's expected to increase.

While the city's program looks to address the safety concerns vacant and abandoned properties often create, officials said their goal is to revitalize affected neighborhoods by replacing demolished homes with renovated or new ones.

"When you are a homeowner, you are invested in the property, in neighbors, in community," Mayfield said. "So it was very important for us to turn North Chicago around."

That's where North Chicago resident David Weil comes in. The city is working with nonprofits like Weil's, ReNew Communities, as well as builders to develop affordable housing for families.