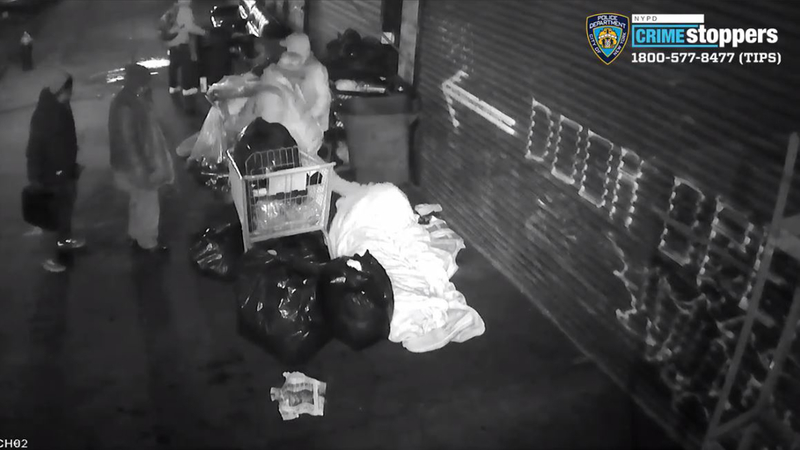 BOROUGH PARK, Brooklyn -- Police are searching for the group of people who violently beat up men sleeping on a Brooklyn sidewalk and stole $5 from one victim.

The attack happened last Saturday around 6:45 a.m. in front of an auto repair shop near 60 Street and 10th Avenue in Borough Park. The men say the group has attacked them for several years now.

The victim was lying under a sheet sleeping when a group of men kicked and punched him. The suspect took turns.

Police are searching for the group of people who violently beat up men sleeping on a Brooklyn sidewalk and stole $5 from one victim.

They eventually dragged the man before punching and kicking some more.

Police say surveillance video released by the NYPD shows a group of homeless men being assaulted last Saturday around 6:45 a.m. in front of the shop.

Wanted for a Robbery that occurred in the vicinity of 1002 60th St. #Brooklyn . Have you seen them? Do you know these individuals?☎️Call 1-800-577-TIPS or DM us!📞Calls are anonymous.💰You may receive up to a $2500 REWARD! #YourCityYourCall @cmenchaca @NYDailyNews @nypost @ABC7NY pic.twitter.com/DxeprvJhoO

A second victim suffered a bloodshot eye from the beating.

"Sharing responsibility for public safety means picking up the phone and helping your police make your neighborhood safer. You can remain anonymous, and you'll get paid for your effort, too."

Police say there were four sleeping victims in all - between the ages of 41 to 61 years old. One of them was left in critical condition due to severe head trauma. Two others were also hospitalized.

"I need it to buy my coffee - now have nothing," said one of the victims.

The victims say the men are from the neighborhood.