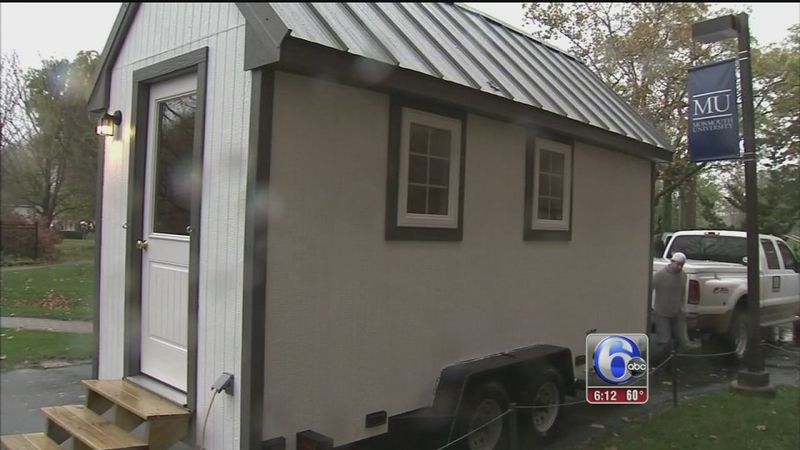 WEST LONG BRANCH, N.J. -- A homeless man from Ocean County, N.J., has been given a fresh start in an extraordinary act of kindness.

Last summer 72-year-old Sam Dill watched as a front end loader destroyed the tent he lived in for years.

It was part of Lakewood's push to dismantle a large homeless camp in the woods called Tent City.

Over a year later, Dill has just been given a brand new home: a tiny 110 square-foot house complete with a bathroom, partial kitchen and bed.

"When you step through the door, home at last. That's the best I can say," Dill said.

The tiny house was built for Dill this summer by volunteers at the Harleysville-based nonprofit Make It Rain, a service organization that raised the $15,000 needed for materials.

"We really love to build things and get things done. So when we heard about the need it really tied in well with what our organization's mission is about," Scott Roth of Make It Rain said.

Dill got the keys to his new house during a social work forum at Monmouth University where the students gave him a basket full of food for a housewarming gift.

Advocates like Dill's friend Minister Steve Brigham, who ran the old Tent City, see tiny houses like this as a way to offer low cost housing to the poor and homeless.

"We just create small houses that people can afford at a minimum wage job. It seems like the answer," Brigham said.

"It's working in other cities successfully and so I think it's a model that we're hoping will take off in other areas," social work specialist Rebecca McCloskey said.

Dill has a new home now, but that's not the end of the story.

The next hurdle will be actually finding a place to put it.

"This is something special, giving somebody a new start," Dill said.

Dill will keep his tiny house at a state park campground temporarily while advocates try to identify a more permanent location for his new home.