Teen's dying wish: Meet, hug her parents again - but they can't get visa for US 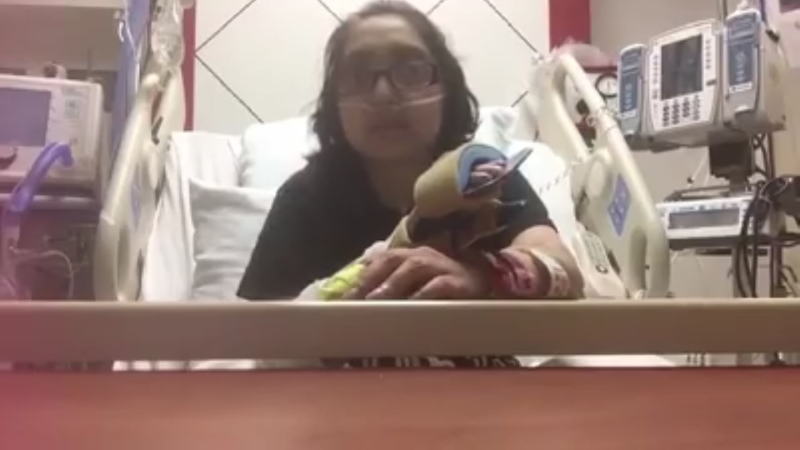 HOUSTON -- An 18-year old girl has a heart-wrenching plea from her hospital bed. She calls it her last wish: to hug her parents, who she hasn't seen since she was a young child.

Qirat Chapra is in Memorial Hermann's hospice care living on a prayer. Her parents are in Pakistan, and have been trying for years to see her, but their visa applications have been denied.

She posted a video on social media begging the public to help get the powers that be to grant her dying wish.

"I have been a patient with Memorial Hermann Hospital all my life and I have lived without my parents and two little brothers," Chapra says.

She was born in the United States while her mom visited family. Her aunt said she went to Pakistan at one month old, and got sick soon after.

"Major diseases attack because her immune system is zero... it's nothing," Neelam Ghanchi said.

Qirat is making a desperate plea to enable her parents to come to Houston to see her before she dies.

Her mom reportedly brought her back to the United States when she was 4. In and out of the hospital ever since, she has lung disease, t-cell lymphoma, frequent pneumonia and more. Her doctors say her time is short.

She says she's holding on for one thing: "I'm only surviving because of all these prayers and this belief living up to each day that my parents would come and hug me."

"I'm taking care of her for a long time and we don't have any hope for visa," Ghanchi says. "So I told her we have no idea how can we apply again because every time they deny it."

Ghanchi tells us they were told the applications were denied because there's enough family here to take care of Qirat.

Immigration attorney Gordon Quan says the best option they have is humanitarian parole.

He says this is as good a reason as any to grant it.

"We've had cases where people have drowned and the family's come for the funeral. We've had other cases where the individual is needed as a witness in a criminal proceeding."

The Pakistani Consul General tells Eyewitness News that he hadn't heard Chapra's story yet, but will do what he can to help make her dying wish happen.

"My last wish to see them. I do not want to leave this world without seeing them. It's been all my life and I don't know how long I'm gonna stand," Chapra said.