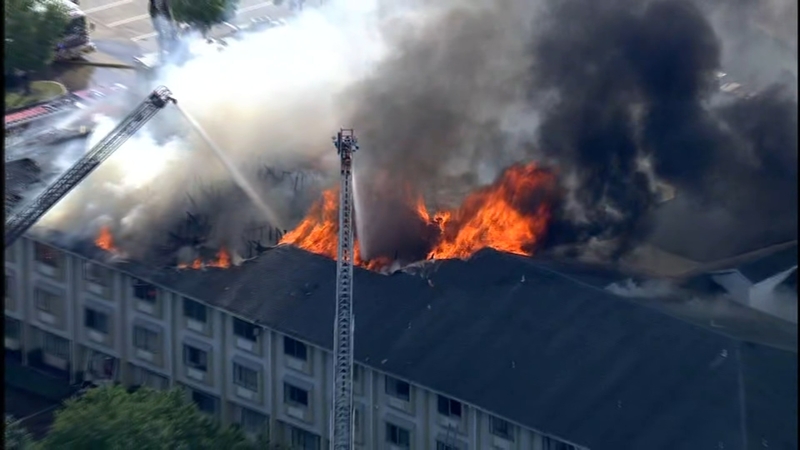 SPRING, Texas -- A babysitter could face charges after a massive fire erupted at a motel in Spring, Texas as children inside were playing with a lighter.

The Harris County Fire Marshal's Office traced the cause of the fire at the Motel 6 near Cypresswood and I-45 to a three and 6-year-old. This is consistent with what witnesses told ABC affiliate KTRK earlier at the scene.

MOTEL FIRE UPDATE: Two young children left alone by a babysitter and playing with a lighter caused it, per @hcfmo. The babysitter could face criminal charges. https://t.co/Wgrjdm6gpI #abc13

Seven people, including two children, were transported to hospitals for smoke inhalation after the blaze engulfed the building, leaving a massive hole in the roof.

Investigators said the children who started the fire were left alone by the babysitter.

When firefighters arrived, they found heavy flames penetrating the roof, sending a thick column of black smoke into the sky that could be seen for miles.

The fire later spread to an adjacent building through a common attic space.

As night fell, guests became frustrated. The motel was a temporary home for several families who were scrambling for a place to stay Wednesday night.

The American Red Cross responded with comfort items like blankets, but one father told KTRK, "I don't need a blanket. I need somewhere to stay."

The motel owner told the local news station he was not authorized to speak.

Video showed the roof of the first structure was destroyed. Crews from at least three departments worked to control the flames.

Spring, Ponderosa and South Montgomery Fire crews are working together to get people and pets out, while putting out a 3-Alarm fire at a Motel 6 at Cypresswood and I45. Please avoid the area! pic.twitter.com/zkNzgTnJj7

None of the injuries appeared to be life threatening, according to officials on the scene.