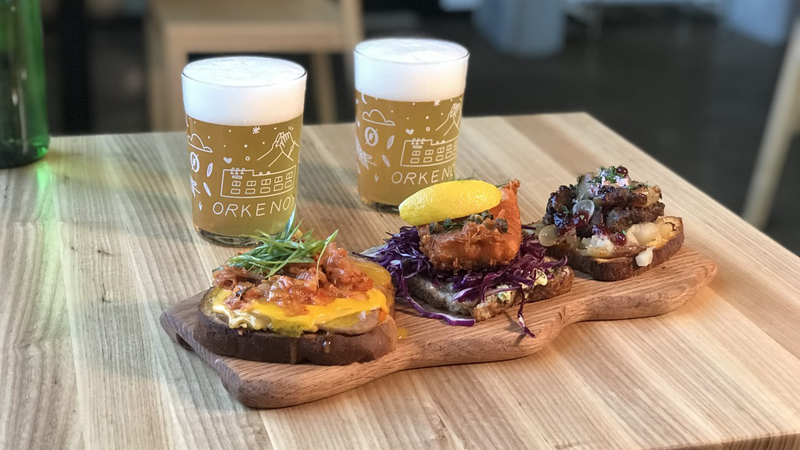 CHICAGO (WLS) -- Despite the fact that significant numbers of Norwegian immigrants could be found on the Northwest Side 100 years ago, Norwegian food is not too common in Chicago.

Humboldt Park's first micro-brewery, Orkenoy, has opened in the Kimball Arts Center where the menu is influenced mainly by Norway.

"Roughly is 'orken' and 'oy,' which is 'desert island.' Being a little off the beaten path here, having the trail, as this great current that'll bring things to us," said Ryan Sanders, chef and partner. "It started with the beer, it was really where that Norwegian influence started."

While farmhouse ales is popular, Sanders says traditional smorrebrd, or open-faced sandwiches, are the stars of the menu. The coffee shop also makes most of the bread themselves.

The brioche gets a base of fried-and-smashed potatoes, tender braised short rib, balsamic-laced cipollini onions, a red wine compound butter graces the top and a spoonful of lingonberries with parsley.

Salmon and fried whitefish is also on the brewery's menu.

"Really classic beer-battered fish. We call it 'Fry Life' because we batter it in (Miller) High Life batter. Really traditional Nordic flavors, sourdough, the remoulade, just a wonder piece of fried fish, some cabbage slaw on there, lots of dill, some fried capers," Sanders said.

"We make everything in the back, so we've got a little five-barrel brewery back there. Tons of juniper floating around here. That's one of the beers we do here is the Maltol, which is you've got it steeped in juniper and all these great, kind of rich Norwegian flavors that find their way in there, and that's something we're really excited to be playing with, is these raw ales and some of these styles that are really traditional European farmhouse styles that no one's really seeing out here," Sanders said.

The daytime coffee shop will be moving to the corner of N Kimball Avenue and W Bloomingdale Avenue, next door to its current location.