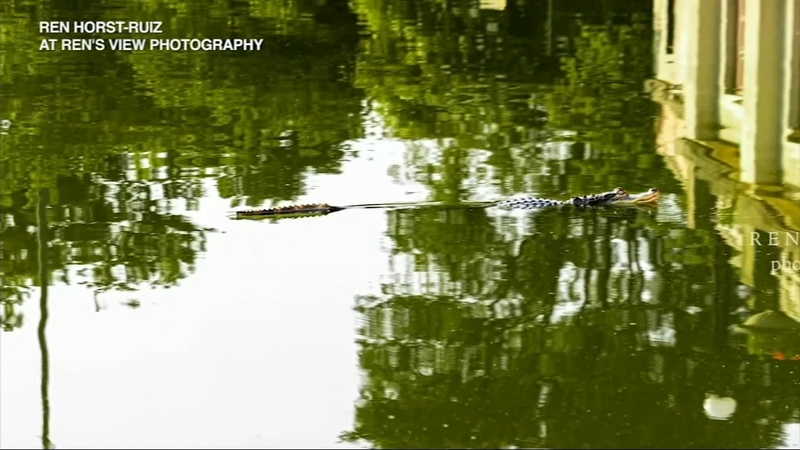 CHICAGO (WLS) -- A search is underway for an alligator spotted Tuesday morning in Humboldt Park Lagoon.

Photographer Rencie Horst-Ruiz was out on the lagoon with a client around 6:15 a.m. when her client spotted what they thought was an alligator in the water. Horst-Ruiz said when she looked down, she saw it too.

"Came around to the pier right there, and he was surfacing. Not all the way, just his head, tail and back," she said.

The alligator spotted earlier Tuesday in Humboldt Park lagoon peeked his head out of the water during our 10 p.m. news.

It bobbed on the surface long enough for her to snap a few shots. She then called Chicago police, who in turn called Chicago's Animal Care and Control.

Animal Care and Control officers have been on site at the lagoon since about 10 a.m. searching for the alligator. It hadn't been seen for hours, until sometime between 4:15 p.m. and 5 p.m., when police were able to independently confirm its existence.

Officer Michelle Tannehill said both police and officers from Animal Care and Control reviewed footage from the lagoon and confirmed there was a 4 foot long alligator in the water.

He is now hiding, and he's likely to be difficult to find.

"They could be sitting right here where this little piece of wood is floating and we wouldn't even know it," explained Alligator Bob with the Chicago Herpetological Society. "He could just suddenly sink down and that's what he's been doing. He pops up, we see him, and then he sinks down."

"They're predominately submarines. They like to be in the water, they like to stay safe," Alligator Bob added.

Humane bait traps are being placed into the lagoon and will be lowered into the water if the animal has not been captured before dark. The traps allow the alligator to swim inside, and then a door closes behind it. After its capture, a trained animal specialist will remove it from the trap and take it to a zoo.

The possibility of catching a glimpse of the gator drew crowds to Humboldt Park lagoon.

"Every time the water moves, everybody gets all excited," said Melinda Barkov, who came out to look for the alligator. "Wishful thinking."

It is not known how the alligator got into the lagoon. It is a misdemeanor to have a pet alligator in the state of Illinois, and it is also illegal to release a pet into a public park.

If the alligator is not captured by sundown, a "trained animal specialist" will place humane bait traps, police said. The traps allow the alligator to swim inside, and release a door behind it.

"It's not that easy," Alligator Bob said. "That's why they keep asking me to come."

Visitors are being asked to stay away from the water until the alligator is recovered. A separate police investigation into who released the alligator into the lagoon is ongoing.