Pair of new pizza styles worth a taste in Streeterville 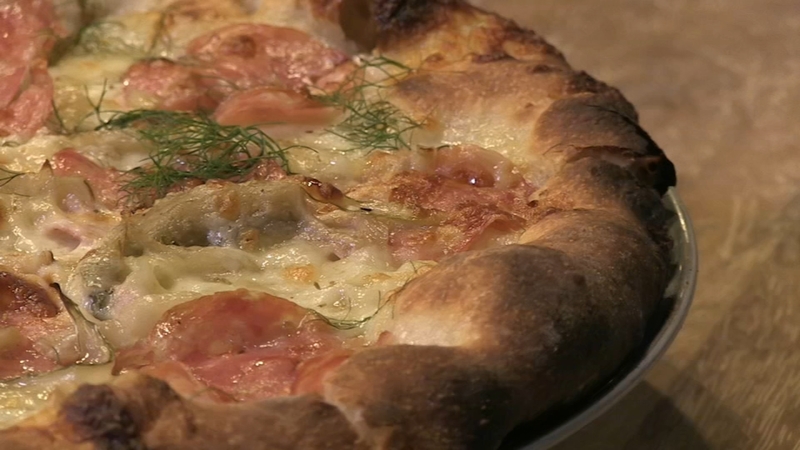 CHICAGO (WLS) -- We all know how important pizza is in Chicago, but our Hungry Hound says two new spots are making great pies that aren't deep dish or tavern-style.

Not many pizza places in town are making their own cheese, but at the new Mozzarella Store, Pizza and Caffe just off of Michigan Avenue, the Italian import is making stracciatella, mozzarella and burrata fresh each day.

"In Italy we produce mozzarella fresh every day. We eat fresh every day, maximum after one week," said co-owner Giorgia Somma. "The flavor, it's completely different. There is more fat in our milk and this makes the mozzarella have more strong flavor than other mozzarella."

Those warm, fresh balls of mozzarella are then transported about 50 feet to the pizza station.

"Our master pizzaiolo is Neapolitan and he has more than 30 years of experience in the restaurant," Somma said.

In Steve's Extra Course Video, he takes a look at the homemade meatballs they serve at Robert's, just in case you're feeling like something besides pizza.

It's all pretty much textbook here: double-zero flour for the dough, San Marzano tomato sauce and homemade fior di latte. However, here the dough does get a longer rest than most Neapolitans.

"Our pizza has 72 hours of fermentation. The dough is so completely light you can eat two at the same time. You stay fantastic with your stomach," said Somma.

The 900 degree-plus oven bakes them in about 90 seconds, resulting in a slightly wet middle.

"But this is good because it means the pizza is real Neapolitan," she said. "I eat with the hands, yeah, I eat with hands or you can close like a wallet."

Meanwhile, Robert Garvey recently re-opened his namesake pizza place in a spot in Streeterville after being closed for about a year. His thin artisan pies are as good as ever.

"It's a little bit of a cross between a Neapolitan pie - a classic Neapolitan pie - and maybe a New York pizza. It's got a nice big structured heel, with a three-day ferment," said Garvey. "I was aiming at a crust that was both chewy and crunchy at the same time."

He begins with dough that is extremely wet, pressing and stretching only with his fingers to keep all of that air and carbon dioxide intact. This technique will result in a nice chewy crumb along the edge. His riff on sausage and onions is also brilliant.

"We caramelize the onions. We roast the red onions for about four hours and it just - between the sausage and the nice onion, it just makes a terrific pizza," he said.

He makes the sausage in-house. He encases and grills it, then adds slices to the pie along with hunks of fresh mozzarella. He then tops it off with some grated mozzarella just to protect the sausage from burning. The result, after about 8 minutes in a 600 degree oven is a beautiful, burnished edge, almost like a ciabatta.

For his fennel pie, he avoids tomato sauce altogether.

"Cream base, mozzarella, nice fennel, braised fennel, nice fennel salami and then we finish it with a little bit of honey," said Garvey.

Plus, he gilds the lily with some fennel pollen, as well as fresh fennel fronds. Garvey makes a case for what actually defines "Chicago-style pizza."

"Really looking for a pizza that was developed in Chicago and that's what we did," he said.

Robert's pizza is a lot different than that wetter, faster-cooking Neapolitan and one of the main reasons is because the dough has the long fermentation and a lot of hydration - zero "tip sag."