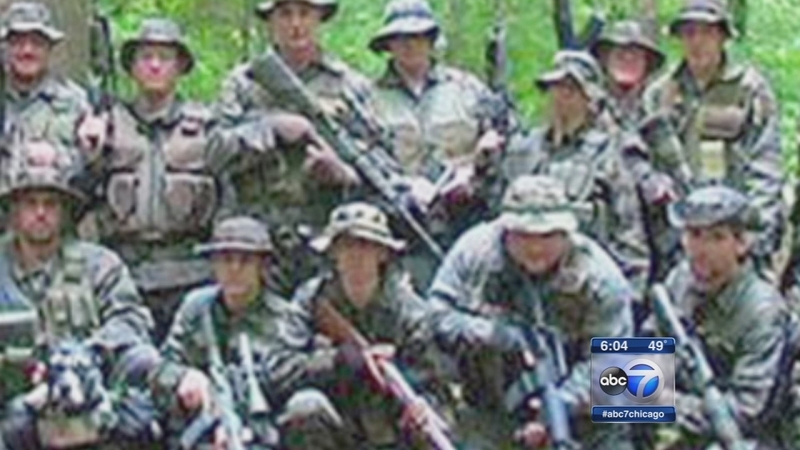 CHICAGO (WLS) -- A Midwest militia organization has lost what may be its final battle with the government. Members of the group called Hutaree wanted to sue federal investigators for violating their constitutional rights five years ago. Today an appeals court said they couldn't sue.

For years the Hutaree Christian Warriors enjoyed playing war games in the woods of Northwest Indiana and Southern Michigan. But in 2010, federal authorities said the Hutaree Games had given way to a violent plot aimed at killing police and overthrowing the government.

Nine militia members were arrested, but the charges ended up being dismissed, and some members sued federal authorities for violating their rights.

The Hutaree Militia formed in 2006, preparing for the apocalyptic end of time with commando exercises and live ammunition training.

The group's philosophy is strongly anti-government, and when the government came calling at the end of March of 2010, federal agents said they had intercepted a domestic terror group bent on sedition using weapons of mass destruction.

Among those charged was 46-year old Thomas Piatek of Whiting, Ind. Federal agents seized a sizable stash of weapons, ammo and war hardware from Piatek's garage.

Despite the haul, the harrowing charges and worldwide publicity, a federal judge in Michigan wasn't impressed. She ended up dismissing the bulk of the case, acquitting seven of the Hutaree members and ordering the seized property be returned.

Piatek and two others filed a lawsuit against the federal agents who infiltrated their group, a suit initially thrown out. Tuesday their appeal was denied.

In the ruling, the court noted that Hutaree members had "acquired a significant arsenal of weapons, including components of pipe bombs, and trained as a paramilitary organization."

Piatek and the others alleged a reckless disregard of their due process rights, including a violation of their first amendment right to the free exercise of religion, which they claimed was violated by the seizure of copies of the Holy Bible. They also said the government's seizure of certain firearms interfered with their second amendment right to keep and bear arms.

The court today didn't buy it and their lawsuit was thrown out.

For the last few years, Piatek's Facebook page has featured a large cake that states "victory over the FBI," a claim that seems in error after Tuesday's court decision. When the I-Team reached Piatek at his home in Whiting, he wasn't interested in discussing the case and abruptly hung up after hearing who was on the line.