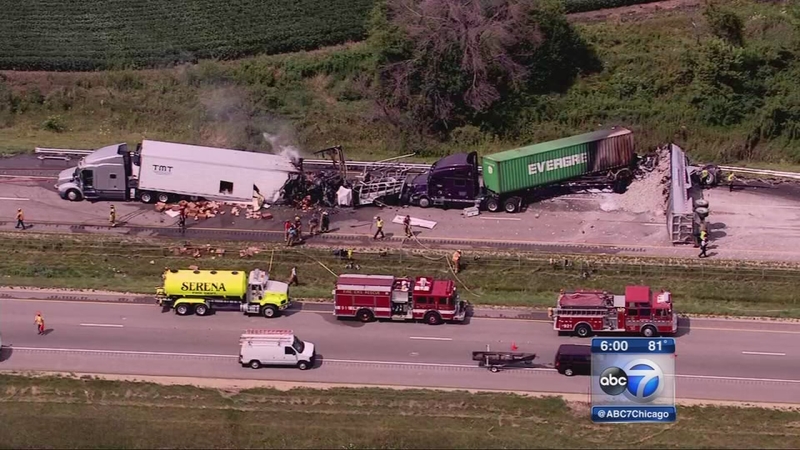 Since Monday's crash on I-80, the ABC7 I-Team has been identifying the trucks involved and checking the vehicle histories and safety records.

Monday's I-80 chain-reaction crash proved again why Illinois is among a handful of states that account for more than half of all truck fatalities in the nation. There were nearly 600 fatalities involving large truck accidents in Illinois in the past five years alone.

Monday's accident was in LaSalle County, southwest of Chicago, and despite that rural location, LaSalle County has among the highest number of truck fatalities in the state.

The accordion-like accident involved at least four trucks, three from Illinois including a back tractor trailer from Breckenridge Trucking in downstate Wenona, Ill.

One rig was from Allstar Trucking in Channahon, Ill. and a smaller truck that was sandwiched in the middle were from a Midwest tire company called Tredroc.

The front vehicle in the accident is a tractor trailer with Utah license plates registered to a company called Mile Hi Specialty Foods in Denver, Colo. The century old firm transports food products for companies including Chipotle and Starbucks.

While it isn't clear which vehicle may have caused Monday's deadly crash, the I-Team has learned that Mile Hi faced a federal investigation in March that found three separate violations, all related to a driver who shouldn't have been behind the wheel.

According to U.S. Department of Transportation records obtained by the I-Team, the company was cited for false reporting of a driver's hours-on-the-road and allowing a disqualified employee to operate one of the firm's trucks.

In June, Mile Hi was slapped with a nearly $25,000 dollar fine for falsely reporting a driver's hours.

Mile Hi officials did not respond to I-Team requests for information, nor did officials of Breckenridge or Allstar Trucking. The I-Team reached out to Tredroc officials and they declined to comment.

Federal transportation records for those other companies turned up no serious or repeat violations.

ABC7 does not have the ID's of the individual drivers in Monday's accident so their personal records are not known.