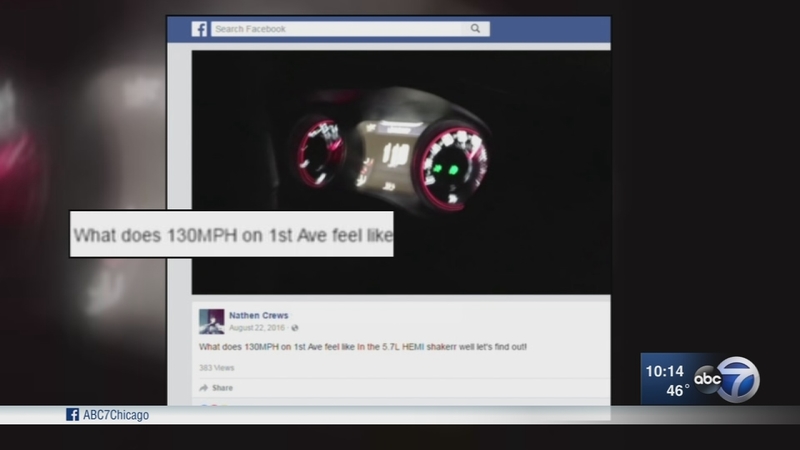 BROADVIEW, Ill. (WLS) -- Eleven weeks after a driver killed himself and three suburban family members in a high-speed head-on suburban crash, the ABC7 I-Team has found videos of cars that appear to be racing more than 100 miles per hour through quiet suburban neighborhoods.

Our I-Team investigation began with tracing the videos that claim to be shot on 1st Ave. and led us straight to a west suburban man claiming to be a police officer.

His Facebook page is under the name "Nathen Crews" and includes a claim that he is connected to suburban police. He appears in photos wearing a police vest in his profile picture, in selfies with officers in suburban Broadview, and this past October checking in at the Broadview police department for "work."

On social media a friend asks "u a cop?" At first he replies "yes," and later "just kidding - I will be after I finish my testing."

In February he wrote, "I don't normally pull over jeeps." His friend said, "I could see you as a cop," and Crews replied, "I am one."

Scattered among the police claims, pictures with police and Crews wearing police apparel, are videos of high speed driving.

In one video, the roar of an engine tears through a quiet night in the western suburbs. An SUV flying down 1st Ave. weaves between cars. The engine screams until the camera falls off the dashboard.

Another video was posted to Facebook with the caption, "What does 130 mph on 1st Ave feel like? Well, let's find out!"

The I-Team showed the videos to Jennifer Smith, whose mother was killed by a distracted driver speeding through a red light. Now she runs an organization based in Oak Park that fights for tougher driving laws.

"Driving that speed, I just don't get it, on a local road even! I mean I drive down 1st Avenue almost every day, I don't know what I would do if that came flying by me," she said.

It was on a similar roadway in Des Plaines last February that three members of a suburban family were killed when their car was struck by an oncoming vehicle traveling at 135 mph. The crash killed Kevin Crawford, 52; his wife, Anita Crawford, 50, and their eldest daughter, Kirsten Crawford, 20. The driver who caused the crash, 21 year old Piotr Rog, also died in the collision.

I-Team investigations revealed that Rog had a history of high-speed driving and numerous license suspensions and that he was drunk at the time of the crash with a blood-alcohol level at three times the legal limit.

Like Rog, Crews posted pictures of his vehicles on social media and video of his high speed driving. Crews' Jeep Commander was pictured against the Chicago skyline, and then, just two weeks ago, he posted a photo of himself as "Officer Crews" with a picture of a Berkeley police department official patch.

The I-Team took Crews' videos and pictures to Chief Phil Smith of the Berkeley police department where Crews insinuated he worked.

"Obviously he likes to drive like an idiot," said Chief Smith.

And his detectives launched an investigation of what the I-Team had found.

"He is not a police officer," said Chief Smith. "Just a knucklehead doing something stupid."

Chief Smith says Crews snapped a photo wearing a patch during a police ride-along with a friend who actually does work for the department.

"This is an embarrassment to our agency, we've got a bunch of professional guys here. They care about the way they look to the public and in this case it makes us look bad because someone purporting to be a police officer from Berkeley did something stupid on Facebook," Chief Smith said.

The I-Team determined that "Officer Nathen Crews" is actually Davanta Crews, a public works maintenance man with the village of Broadview, the town where he lives. The I-Team paid Crews a visit at his home:

Chuck Goudie: "I need to speak to Davanta please."
Davanta Crews: "What's this about?"

As for the speeding video, Crews didn't respond to the I-Team's questions because his mother slammed the front door and terminated the conversation.

"I don't understand why people don't think about the dangers when they're behind a 4,000 lbs. deadly weapon and the lives that they could change forever," said driving safety advocate Jennifer Smith.