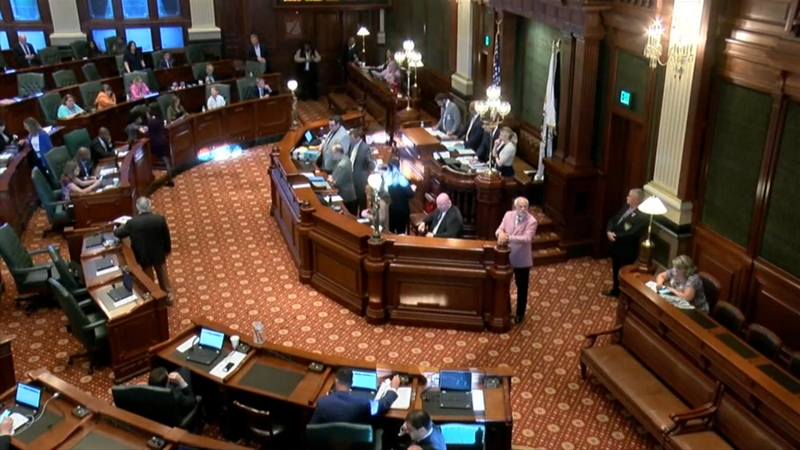 SPRINGFEILD, Ill. (WLS) -- A controversial abortion bill has cleared a house committee in Springfield and has now been sent to the full Illinois House, where it is being debated Monday.

The state's Human Services Committee passed the Reproductive Health Act bill in a rare late night Sunday meeting. The measure had been stalled for months.

The bill would remove abortion restrictions in Illinois, repealing both the state's Partial Birth Abortion Ban Act and the Illinois Abortion Act of 1975. The new bill would removed restrictions on both abortions later in pregnancy and criminal penalties for physicians that perform them. It also would expand insurance coverage for procedures and contraception.

"RHA codifies our existing practices and, and this is critical, treats abortion care just like any other health care, because it is," said State Representative Kelly Cassidy (D-Chicago).

Cassidy sponsored a bill that if passed would be the most liberal reproductive health care measure in the country. But opponents say the bill was rushed, leaving them little time for debate.

"This is new language. It strips completely any rights of state to protect the rights of the unborn," said Zach Wichmann, director of government relations for the Catholic Conference of Illinois.

Religious organizations, including Catholic churches have already begun to mobilize their base, asking congregants to reach out to lawmakers.

"We need to pray for them so they will be filled with the Holy Spirit so they can make the right decision," said Holy Name parishioner Liji George.

"Make no mistake, it doesn't end here. Since Roe was decided in 1973, our opponents have fought to impede access to care and these efforts have the greatest impact on the most vulnerable population," Cassidy said.

Sunday night Chicago Mayor Lori Lightfoot's office put out a statement saying, "I applaud the legislators who voted yes tonight on the passage of the Reproductive Health Act. With the onslaught of attacks against reproductive rights happening all across the country, we must act to double down on protections here in Illinois. The time is now to ensure that we preserve access to safe, legal abortion in our state. We won't go backwards. The full General Assembly must act swiftly to pass the RHA."