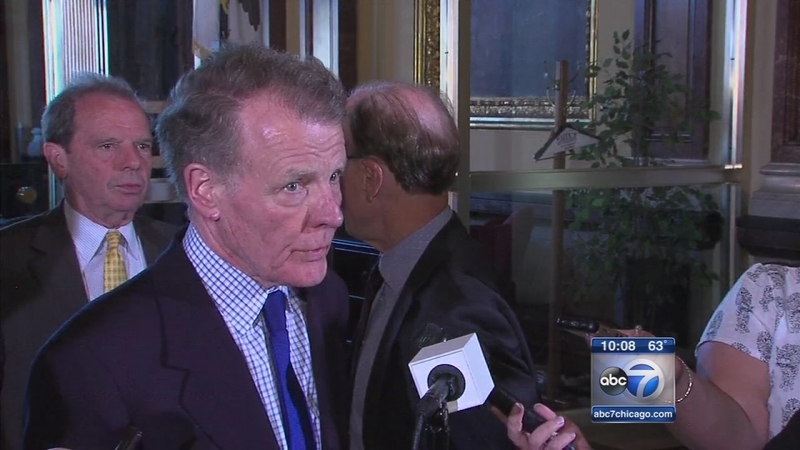 CHICAGO (WLS) -- Legislative leaders in Springfield emerged from a meeting with Governor Bruce Rauner saying progress is being made on the Illinois budget.

A deal is close for a stopgap budget that would provide funding for roads, human services and other major government operations.

House Speaker Michael Madigan emerged from a meeting with the governor saying that progress is being made.

"I'm optimistic," he told reporters, surprising many. "It appears to me that everyone that's in the negotiations is negotiating in good faith. There are a lot of proposals on the table, a lot of good ideas."

Republcians spoke of progress but only tentatively.

"I would just say we met for a long time and we're going to reconvene in the morning," said House Minority Leader Jim Durkin.

However, both sides remain far apart on school funding.

"My focus is on persuading the governor to drop some of his rhetoric to continue to work to compromise with us," said Speaker Madigan earlier in the day

Democrat leaders have dropped their proposal to change the school funding formula to fight for an overall increase instead.

"We want to put extra money in education, it's not earmarked for any one school district, it's actually spread throughout the state," said Senate President John Cullerton.

But Cullerton said the $100 million for the CTU pensions is at least what the state owes Chicago since, he says, Chicago taxpayers pay for city and state pensions.

"Chicago is being treated separately and distinct right now. Unfairly. So what we are trying to do is correct that unfairness by giving some money to their pension system," Cullerton said.

"Ever since Chicago pulled their teachers out of the state pension system they've been getting a special block grant from state to make up for it," State Sen. Matt Murphy, R-Palatine.

Murphy said that, in the past, Chicago used the teachers' pension fund as a credit card.

"It's not fair to suburban taxpayers who are getting killed with property taxes to then have to bail out a CPS system that has been so irresponsible with money for years," Murphy said.

Murphy said he is unsure how the state would pay for the Democrat's education plan.

There are other program, like a state-sponsored motorcycle safety class in Joliet, which remain in jeopardy as Illinois approaches a full year without a budget. Participants in that class worry the stalemate is putting lives at risk.

"We're all people, we all have families to go home to and want to make it home safely," said Stephanie Jackson, a motorcycle safety class participant.

Now those impacted by the cuts are marshalling forces, painting protest signs in case a deal isn't reached by Friday.

The governor and his spokespeople declined to characterize Tuesday's three-hour bargaining session.

The governor has already warned of a shutdown of services if a budget deal isn't reached by Friday. Thursday is the end of the fiscal year.