Coronavirus Illinois: COVID-19 cases top 98K with over 4K deaths; IL may be 'falling from a peak' of COVID-19 infections, Pritzker says 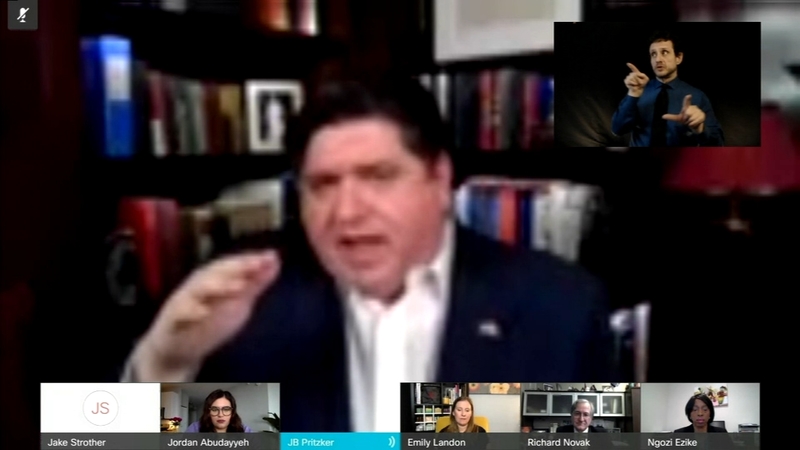 Illinois may be 'falling from a peak' of COVID-19 infections, Pritzker says

CHICAGO (WLS) -- Governor JB Pritzker said Tuesday he's "optimistic that we're falling from a peak" as Illinois leads the country's most populous states in coronavirus testing per capita over the last seven days.

Illinois health officials announced 146 additional deaths and 1,545 new cases of COVID-19 on Tuesday. That brings the statewide total to 98,030, including 4,379 deaths.

For the first time in weeks, the number of people hospitalized with COVID-19 is on the verge of falling below 4,000, and the number of patients in ICU is below 1,000. Illinois is on track to move to Phase 3 of Gov. Pritzker's reopening plan by the end of the month.

The governor responded to positive trends, including in the northeast region, where hospital admissions are down more than 40% since May 1 and the test positivity rate has fallen more than 5% in the last 14 days.

"We may be heading downward now. Again, with more and more days behind us, we can follow and see, is this a blip? Or does it look like it's really consistently going down?" said Dr. Ngozi Ezike, Illinois Dept. of Public Health. "In any case, that's great. We're hoping that we are there."

Governor JB Pritzker said Tuesday that Illinois has become the No. 1 state in the country in coronavirus testing per capita in the last seven days.

It comes amid growing pressure to reopen faster. Officials in Rockford and Winnebago County have announced plans to reopen restaurants, child care facilities, and houses of worship on June 1.

"This is not science or data. Frankly, it's beyond politics," said State Rep. Deanne Mazzochi, R-Elmhurst. "This is arbitrary, abusive, it has to stop."

Ahead of Wednesday's legislative session, GOP state lawmakers said they will move to challenge a new enforcement tool authorized by the governor allowing defiant business owners to be charged with a class A misdemeanor punishable by a fine of up to $2,500.

"We should not punish those who are the backbone of our state's economy just for trying to survive," said State Rep. Keith Wheeler, a Republican who represents Kane and Kendall counties.

Urging the entire state to stay the course, the Governor once again relied on science as he invited two infectious disease doctors to help him make his case.

"Our transmission balance is tenuous, and business as usual could set off another wave of infections that threaten our lives and our livelihoods," said Dr. Emily Landon, with University of Chicago Medicine.

Dr. Richard Novak from the University of Illinois Health System said nationwide vaccine trials are expected to begin this summer, including in Illinois, and he encouraged people to volunteer.

Dr. Landon shared the three things every resident must do as Illinois prepares to move to the next phase of reopening in less than 10 days.

As Illinois slowly moves into the next phase of reopening, the debate over Governor JB Pritzker's plan to keep businesses closed and penalize them if they open, is growing sharper.

Republican representatives across Illinois held a Zoom conference Tuesday morning. They said Governor Pritzker's latest emergency rule, penalizing businesses that open in defiance of the shutdown, is an abuse of power, and throws due process out the window. They are calling for the General Assembly to meet and vote on the rule.

"He cannot and should not unilaterally keep ruling the state as he has been doing for the last two months," said state Rep. Keith Wheeler, (R-50th District). "It's time for collaboration. The Pritzker administration has reached beyond its authority and it's time to restore proper checks and balances to state government so tomorrow morning I will make the motion to suspend this emergency rulemaking that criminalizes business owners,"

The General Assembly is scheduled to meet this week.

Following a weekend of rallies, in Chicago and Springfield, the governor accused some protesters of spreading hate and fear, including hate-filled, anti-Semitic messages that have been directed at him.

"I have to admit that I am worried about my family's safety. You saw some of the signs, you saw the vehemence that people were carrying those signs with swastikas and pictures of Adolf Hitler, references to me and my family," Pritzker said. "Yeah, I'm concerned. But I also want you to know that I am undeterred from the path we're on. I think we're doing the right thing."

Governor Pritzker laid out details Monday of a new contact tracing system to be launched with local health departments in the next few weeks. Improving contact tracing, which helps identify and locate anyone who's been in contact with a COVID-positive patient, is a step the governor has said is crucial to reopening the state.