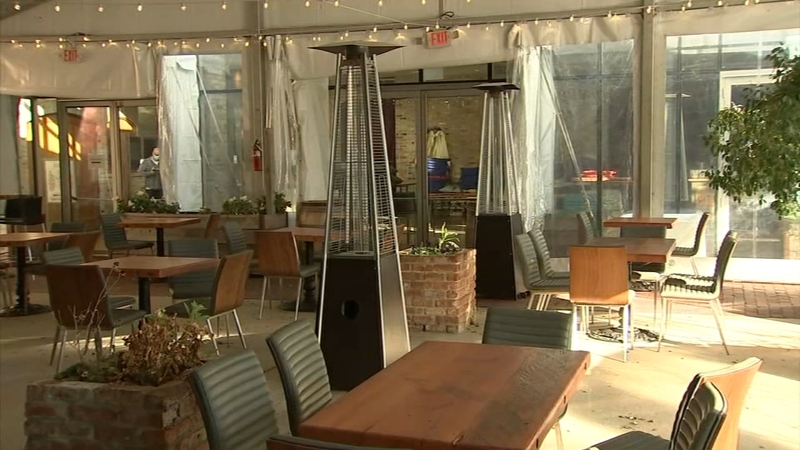 CHICAGO (WLS) -- Chicago restaurant owners are trying to extend outdoor dining as temperatures drop, but a group of them is asking Mayor Lori Lightfoot to reopen indoor dining in the city, even as COVID-19 cases surge.

Tents and domes are rapidly being constructed on available sidewalks, but they are not the first choice for restauranteurs or customers. For now, with the ban on indoor dining, they may be the only choice.


"For the next six and a half months, this may be all we can do," said Phillip Waters, The Bristol.

Walters said the Bucktown restaurant has spent tens of thousands of dollars on filtration systems, air purifiers, UVC light, and most every other safety measure to make the dining room safe. But they are still forced to seat customers outside, so they've got portable heaters, lights and even music systems to try to make customers comfortable.

But Walters and a group of other Chicago restauranteurs say they shouldn't have to do this.

"It's time for the city to stop scapegoating restaurants for the virus," said Roger Romanelli, Fulton Market Association.

The Fulton Market Association points to statistics they just got from the city through the Freedom of Information Act that suggests only about 3% of COVID-19 patients the city was able to track during a three month period could be traced back to having visited a restaurant. The city's data, however, included less than a third of those with COVID-19.


Restaurant owners are now calling on the mayor to reopen indoor dining.

Walters said he believes his restaurant is safer than most people's homes.

"We are the gold standard of safety," he said.