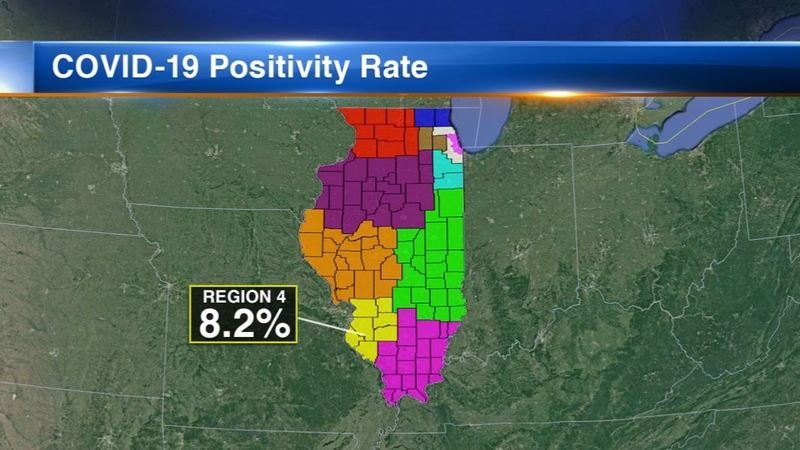 RELATED: Chicago could be next COVID-19 hotspot, researchers warn

Researchers used by the COVID-19 Task Force are predicting Chicago will be one of the next hot spots for the virus to hit.

For comparison, when the state reported 2,508 new COVID-19 cases on May 24, laboratories had only processed around 25,000 tests.

As of Saturday night, 1,581 people in Illinois were reported to be in the hospital with COVID-19. Of those, 345 patients were in the ICU and 116 patients with COVID-19 were on ventilators.

Public health officials said much of the uptick in cases has been fueled by large summer gatherings and just too much non-essential activity. They said the state is in a critical moment to reverse that trend.

On Sunday, Pritzker and the Illinois Department of Public Health announced new COVID-19 mitigation efforts that will be implemented in the Metro East area beginning Tuesday.

Region 4 is now reporting three consecutive days of a test positivity rate of 8% or higher, triggering implementation of mitigation efforts as outlined in the state's COVID-19 Mitigation Plan.

"Throughout the COVID-19 pandemic, I have made it clear that neither arbitrary dates on a calendar nor political pressure will dictate Illinois' efforts to protect our people. If the data shows we need to go backwards in our reopening, I won't hesitate to tighten restrictions to protect our collective health," Pritzker said. "Region 4 of our statewide 11 reopening regions - the Metro East - has now surpassed an 8% seven-day rolling average positivity rate - a trend that I have made clear would trigger stricter mitigations when this plan was announced in July. Working with local officials in the Metro East region and across the border in St. Louis, we are implementing stricter mitigations that account for the unique factors in this region. Dr. Ezike and I are imploring local leaders and residents alike: if you haven't been taking this seriously yet, now is the time to start."

Among other restrictions, all restaurants and bars will in Region 4 must close by 11 p.m. and dancing or standing in indoor bars is prohibited.

"As we warned when we began reopening Illinois, we are seeing an increase in cases, emergency department visits, and other indicators that the virus is circulating more widely in the community," said IDPH Director Dr. Ngozi Ezike. "Region 4 is the first of the 11 regions to reach resurgence criteria, but we hope it will be the last. By implementing additional mitigations, such as decreased indoor capacities and limiting hours, we hope to reduce the spread of the virus in the Metro East, and also help prevent an increase in cases, hospitalizations, and death in other regions of the state."

Officials said Will and Kane counties are now in the warning zone, along with 12 other Illinois counties - Bureau, Cass, Clinton, Franklin, Greene, Grundy, Hancock, Jefferson, LaSalle, Moultrie, Perry and Union - because of a sustained increase in test positivity rate and COVID-related hospital admissions.

Will County reported an additional 134 more cases Friday than Thursday. Officials say the numbers started going in the wrong direction around July 4, and things have gotten worse as people relax their social distancing and hold informal get-togethers during the summer.

Now health officials there are urging people to raise their guards once more and be as vigilant as they were in the spring.

"Our contact tracers were telling me some people have the idea, 'OK, I'll go to a very small birthday party. Fine, I'm not doing anything wrong,'" said Steve Brandy, public information officer for the Will County Health Department. "But if you go to one small gathering and then another small gathering and then another, and at all of them you are not practicing safe social distancing and not wearing your mask, guess what, it's just as dangerous, and you just as likely could be spreading coronavirus."

At Silver Cross Hospital in New Lenox, the number of COVID-19 patients has risen sharply in recent weeks.

"We're seeing probably twice as many as we have in July on a daily basis, but this is not nearly where we were in the throes of this in April and May, where we saw four times that volume," said Dr. Chris Udovich, chief medical officer.

Despite the rise in cases, staffing, equipment and bed capacity remain at high levels.

"I think if there is a surge or an uptick in cases, we can certainly handle it. But ideally, of course, we don't want to see that," Udovich said.