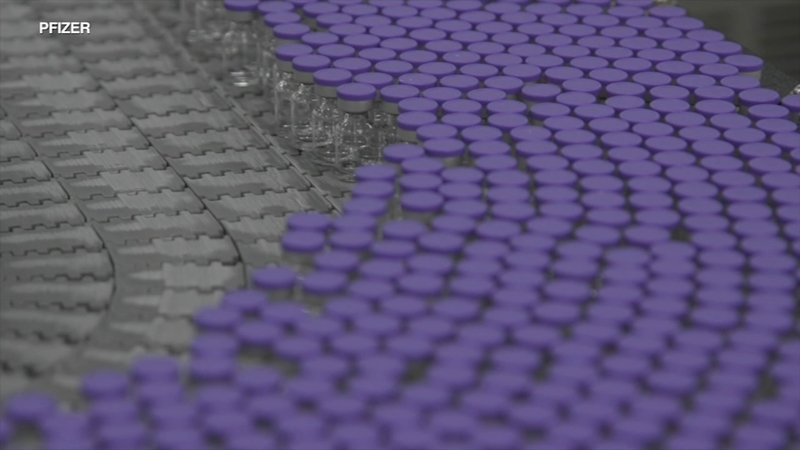 During his COVID-19 update, Governor JB Pritzker said Illinois is leading the country in number of vaccine doses given.

On Wednesday, state officials once again urged people to celebrate only with those in their immediate household, although there seemed to be an acceptance that many of those warnings will likely go unheeded.

"I know some of you won't or cant. And for those of you I ask you think of additional safety measures that you can take as you travel, as you gather, that can make the visits somewhat safer," Dr. Ngozi Ezike said.

The half-hearted call for prudence came as Governor JB Pritzker released the latest vaccination figures during a virtual briefing before the holidays.

"Illinois, including the City of Chicago, has, as of last night, administered 100,991 vaccine doses to date. That's more than any other state in the nation so far," Pritzker announced.

The vaccination figures were coupled with an update on the receipt and distribution of the vaccine so far.

This week's allocations from the federal government for the entire state included approximately 76,000 doses of Pfizer, and 222,000 doses of the newly approved Moderna vaccine.

The Moderna vaccine has a longer shelf life, and has a less stringent cold storage requirements which has made it far easier to transport.

"The vaccine team in Illinois sprinted past them all in week one, " Governor Pritzker said.

"With this week's Moderna shipments, vaccine will have officially reached all 102 counties in Illinois," Pritzker said.

Even as there is light at the end of the COVID-19 tunnel, the governor announced help for low-income parents enrolled in the state's childcare assistance program Wednesday.

The state promised to cover all eligible days for December, January and February, while also making it easier for providers to have their costs re-imbursed, during what has been a challenging year for the entire childcare industry

Pritzker said the state does appear to be headed in the right direction, although he made it clear, indoor dining at bars and restaurants will not happen until he can be sure there is no post-Christmas and New Year's Eve surge.

Over a 24-hour period, officials said the state processed 82,328 specimens. In total there have been 12,688,071specimens tested since the start of the pandemic in Illinois.

The preliminary seven-day statewide test positivity from Dec. 16-22 is 9.0%.

The test positivity rate is a metric the state began providing in late October. It is calculated by using the total number of positive tests over the total number of tests. This is the metric being used to by state health officials to make decisions about mitigations.

Cardinal Blase Cupich and other faith leaaders rolled up their sleeves to get the COVID-19 vaccine at St. Anthony's Hospital Wednesday morning.

"We're here today to be supportive of the effort of St. Anthony's Hospital building confidence in this vaccine," Cardinal Cupich said. "We wanted to make sure that people are encouraged to become vaccinated and also to have confidence in it and to realize that being vaccinated as the Holy Father has told us is an opportunity for us to be supportive of the common good."

This latest campaign to encourage vaccination comes as Chicago prepares to expand its distribution efforts.

Dr. Allison Arwady said as the city receives shipments of the Moderna vaccine, the focus will be on getting doses to long term care facilities and beginning vaccination for outpatient providers like doctors offices and COVID-19 testing sites.

Arwady says the city will begin utilizing its first mass vaccination sites next week as well.