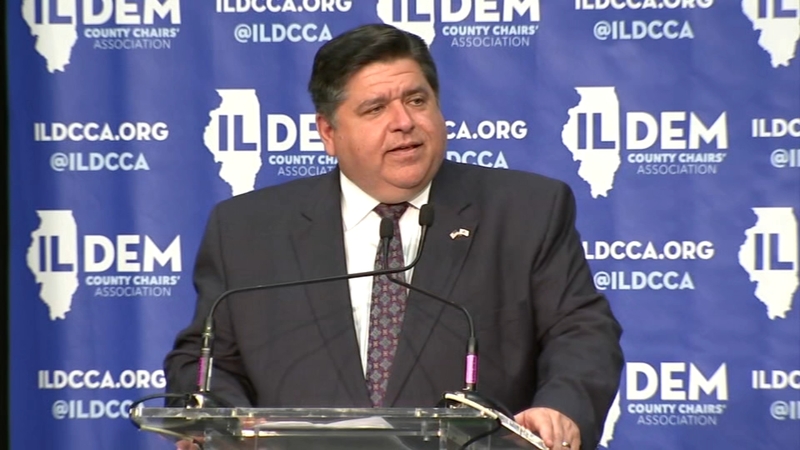 Democrats rally on Governor's Day at the State Fair

SPRINGFIELD, Ill. (WLS) -- More than 2,000 Democrats gathered Wednesday at the Illinois State Fair to rev up their base as they looked ahead to the 2020 election.

House Speaker Nancy Pelosi came to Springfield to rally the party with a message about the importance of defeating President Donald Trump.

"Are you all ready the elect a Democratic president," Pelosi said at the State Fair's Governor's Day. "Illinois coming in very, very strong for whoever -any one of our candidates would be a president. We know that."

Pelosi was the headline speaker at a breakfast gathering where thousands of Democrats rallied and celebrated successes this year.

Republicans were a top target for criticism, particularly President Donald Trump, who is a major motivating factor for Democrats and will continue to be between now and the 2020 election.

"It's a president who thinks that we are so blind that we don't see right through his racism and xenophobia," Said Gov. J.B. Pritzker. "When he tries to cloak it in words like 'there are very fine people on both sides,' or when he sees four powerful women of color who oppose him and he says, 'send them back.'"

Democrats are using the rally to highlight the political differences they hope to capitalize on to elect more of their own.

One week after President Trump said he was considering commuting the corruption sentence of former governor Rod Blagojevich, the President now appears to have backed down after two Illinois Republican congressmen personally called and asked him not to do it.

Pritzker said he thinks Congressional members "must know that the President is simply trying to distract from all the other challenges that he's brought to the American people including, as you know, and we talked about this today, the trade war that's so bad for our agriculture community."

The governor and others said Blagojevich is where he belongs, behind bars.

"While over time people might like soften their hearts a little bit and feel bad for the guy, let's remember that we're talking about a governor of the state of Illinois, who set the tone of his governorship at the end by trying to extort the Children's Memorial Hospital and their president," said Illinois State Comptroller Susan Mendoza.

While there were many critics of the president, Governor's Day in Springfield also provided a chance for them to tout successes in the past year, including passing a balanced budget and raising the minimum wage.