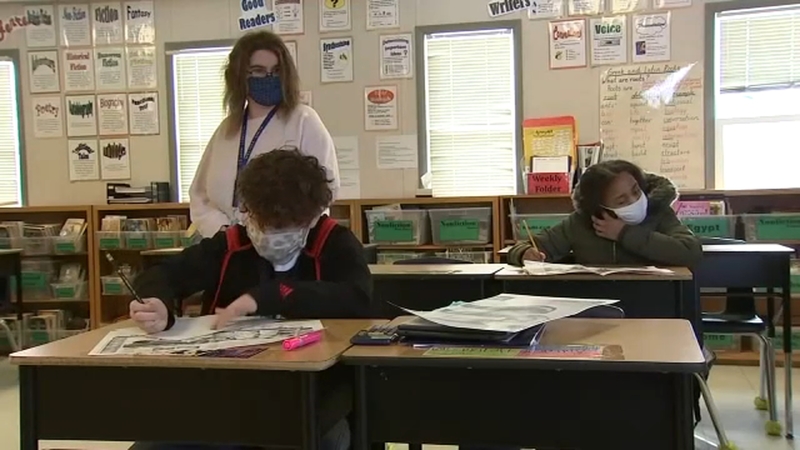 CHICAGO (WLS) -- The recent ruling on Illinois school mask mandates is now putting pressure on districts to decide whether or not to enforce Governor J.B. Pritzker's order.

Last week, a downstate Illinois judge ruled against the state's school mandates, including masking, in response to lawsuits involving parents and teachers from more than 150 districts. It's a decision the Illinois Education Association warns could result in school shutdowns.

While we already know this legal decision will not change mask requirements in Chicago Public Schools, and Pritzker had said the state is expediting an appeal to get the judge's order reversed. It is why, even as some schools have already decided to go mask optional, others are taking a wait and see attitude.

As of Monday, thousands of schools across Illinois have a decision to make. Will they or won't they continue to enforce the governor's mask mandate that has been in place since in-person learning resumed at the start of the pandemic?

"We should not have to fight every inch for basic protection, but such are the times in which we live, where the few can trump the safety of the many," CTU said in a statement following the ruling.

For some, it's a non-issue. Chicago Public Schools and its 350,000 students will continue masking.

CPS said in a statement last week that the court's ruling does not prohibit the school district from continuing its COVID-19 mitigation policies and procedures, including universal masking, and that the district "will stay the course."

For others, like Timothy Christian Schools in Elmhurst, masks will become optional.

"We have wide spaces [and] large classrooms. We believe we can achieve this," said Matt Davidson, superintendent for Timothy Christian Schools. "We're seeing it in so many places, tens of thousands of schools across the country, have been mask optional all year long."

Davidson said he believes he has the support of most of his school community. With nearly 1,300 students, Timothy Christian is the largest Christian School in Illinois.

"We have kids who are really suffering," Davidson added, "and we just want to present an optional environment where those decisions for the children can be made in the home and we're going to respect them."

While school boards across the state continue to debate the issue, others prefer to take wait to see how the appeals process pans out.

The Archdiocese of Chicago sent a letter to parents and students Saturday that said they are "closely monitoring the case."

"Because future court rulings may go back and forth, and because changing our policies back and forth would create confusion and disruption in our schools, we will continue the current mask policy for now," Archdiocese officials said.

Notably, U-46 in Elgin, the state's second-largest school district has not yet made a decision regarding masks. District officials said their lawyers are continuing to review the Sangamon judge's decision before making a final one of their own -- which they do hope to announce sometime Sunday night.

"This decision has the potential to shut our schools down, effectively closing our school buildings and perhaps being potent enough to stop in-person learning altogether," the Illinois Education Association said in a statement. "The teacher and education employee shortage is at a crisis level. Schools are shutting down because they do not have enough healthy employees to safely hold classes even though staff continue to give up their plan time and lunches to cover classes."

Geneva District 304 has declared Monday an emergency day as the schools work out what they will do regarding masks, officials announced Sunday night. The day will be made up on May 31.

Hinsdale District 181 schools also declare an emergency due to the mask ruling and will be going remote Monday, officials said.

In St. Charles, district officials have also decided to cancel classes and use an emergency day Monday. They also voted that starting Tuesday, masks will be suggested but not required. The board added that they encourage everyone to wear a mask due to high transmission rates in schools.

Gov. JB Pritzker said late Friday he is seeking an expedited appeal. In the past, he has been successful in overturning similar challenges to his use of emergency powers. But for now, this ruling is significant and could impact thousands of schools.

Attorney Tom DeVore represents hundreds of Illinois students and parents and several dozen teachers across more than 150 districts, including CPS and some suburban school systems who filed suit against the state's school mandates for vaccination, testing, and masking.

In granting them a temporary restraining order, Sangamon County Circuit Court Judge Raylene DeWitte Grischow said the mandates violate the plaintiffs' "due process rights under the law which provide them a meaningful opportunity to object to any such mitigations."

"This is a very strongly-worded opinion which is essentially accusing the governor, the executive branch, of doing an end run around the statutory scheme in trying to avoid judicial review in pushing through these emergency regulations," ABC7 legal analyst Gil Soffer said.

The order applies to the plaintiffs - those students, parents, and teachers who sought relief - but it could have broader implications.

The judge wrote: "Any non-named Plaintiffs and School Districts throughout this State may govern themselves accordingly."

Gov. JB Pritzker vowed an immediate appeal Friday night, saying: "The grave consequence of this misguided decision is that schools in these districts no longer have sufficient tools to keep students and staff safe."

For now, it's unclear what school districts are going to do come Monday. CPS declined to comment Friday night. The Illinois Federation of Teachers is calling on districts to continue their current practices.

Governor Pritzker has asked the Illinois Attorney General's office for an immediate appeal of Judge Grischow's decision to restrain the State from enforcing the safety measures aimed at protecting teachers, school personnel, students and communities from COVID-19.
The Attorney General is seeking an expedited appeal from the Fourth District Illinois Appellate Court.
"The grave consequence of this misguided decision is that schools in these districts no longer have sufficient tools to keep students and staff safe while COVID-19 continues to threaten our communities - and this may force schools to go remote," said Governor JB Pritzker. "This shows yet again that the mask mandate and school exclusion protocols are essential tools to keep schools open and everyone safe. As we have from the beginning of the pandemic, the administration will keep working to ensure every Illinoisan has the tools needed to keep themselves and their loved ones safe."
"We remain committed to defending Gov. Pritzker's actions to mitigate the spread of COVID-19 and will appeal this decision in the Illinois Appellate Court for the 4th District in Springfield," said Attorney General Kwame Raoul. "This decision sends the message that all students do not have the same right to safely access schools and classrooms in Illinois, particularly if they have disabilities or other health concerns. The court's misguided decision is wrong on the law, demonstrates a misunderstanding of Illinois emergency injunction proceedings and has no relation to the record that was before the court. It prioritizes a relatively small group of plaintiffs who refuse to follow widely-accepted science over the rights of other students, faculty and staff to enter schools without the fear of contracting a virus that has claimed the lives of more than 31,000 Illinois residents - or taking that virus home to their loved ones."
Since the beginning of the COVID-19 pandemic, the Pritzker administration has implemented mitigations and programming to protect the health and safety of students, teachers, and staff in schools. To facilitate safe in-person learning, the administration has provided schools across the state with 3.8 million masks for students, teachers, and staff as of January 12th. The State has completed over 2 million COVID-19 tests in schools through the SHIELD program and sent more than a million rapid tests into schools outside of the City of Chicago. Recently, the State provided 350,000 rapid tests to Chicago Public Schools to facilitate a return to in person learning.
To increase access to the lifesaving COVID-19 vaccination, the State has held 1,767 on-site vaccination clinics in schools and day camps with an additional 470 clinics already scheduled. Vaccinations, boosters, mask-wearing and testing are the key to keeping schools open and to maintaining safety standards for staff and students alike.

Full Statement from Illinois Federation of Teachers
The Illinois Federation of Teachers is greatly distressed at the judge's temporary restraining order (TRO) in this case. Hundreds of thousands of students, teachers, and staff across Illinois are doing their best to remain healthy and keep schools open. We believe what the judge ordered today is legally faulty and a threat to public health and, most importantly, a threat to keeping Illinois schools open for in-person learning. Our children and their families need certainty and some normalcy at school, not legal wrangling managed by a small minority of citizens.
We urge the judge to stay her ruling and the state to appeal it as soon as possible. In the meantime, we will continue to advise our members on how to remain safe and healthy at work. We insist that school districts statewide abide by existing agreements on health and safety. In fact, the safety mitigations encompassed by the State's guidance, as well as vaccinations for children and adults, are the best ways to keep schools open and everyone healthy. And we will stand with our local unions to protect our members and the students they serve.
Report a correction or typo
Related topics:
health & fitnessillinoischicagoelginhinsdaleelmhurstgenevabarringtonwheatonlake forestst. charlescovid in childrenjb pritzkercoronavirus chicagocoronaviruscoronavirus illinoischicago public schoolscovid 19face maskschoolscatholic schoolschoolcpslawsuitchicago archdiocese
Copyright © 2022 WLS-TV. All Rights Reserved.
LAWSUIT
Listeria outbreak ice cream: FL-based dessert possible bacteria source
Family of boy, 11, killed in Iowa amusement ride accident sues park
Lawsuit against Brian Laundrie's parents will proceed, judge rules
Kentucky abortion ban on pause; judge to block Florida ban
TOP STORIES
New details revealed after accused shooter confesses: prosecutor
Woman recalls finding toddler after both parents killed in massacre
Crimo family attorney says accused shooter's parents are 'distraught'
'My department is devastated': Police chief recalls parade shooting
Park Ridge teen pinned to ground by off-duty CPD sergeant | VIDEO
4 shot on Near West Side near United Center: CPD
Girl, 8, injured on CA Six Flags ride by flying cellphone: Family
Show More
Suburban teacher let go after misconduct accusations
Chicago Weather: Rain by evening Thursday
Victims of Highland Park shooting remembered for kindness, warmth
Illinois red flag laws: How the parade shooter fell though the cracks
Bailey, Illinois gov candidate, apologizes after Highland Park comment
More TOP STORIES News