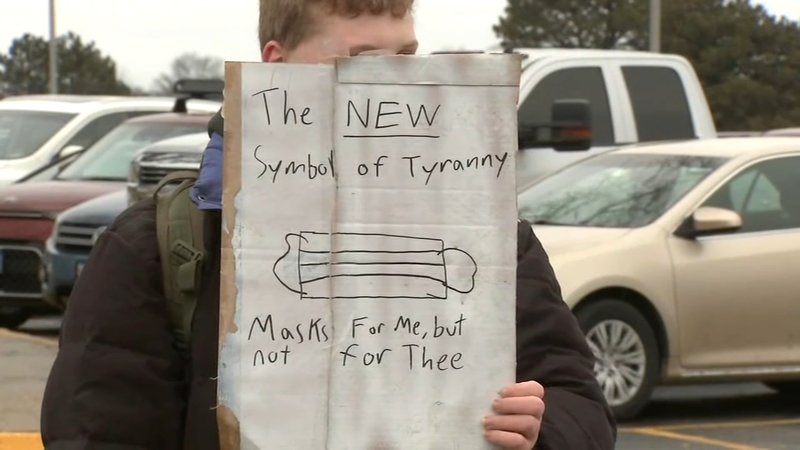 WARRENVILLE, Ill. (WLS) -- Frustration continues to build over the mask debate in schools, with students in at least two suburbs walking out in protest Wednesday over the mandate staying in place at their schools.

At Mundelein High School, where mask use is still required, a large group was turned away after they tried to walk in unmasked.

How long could appeal to school mask ruling take?

"You can be for masks or against masks, but voicing your opinion matters," Mundelein student Ty Worbieski said.

"Me and four others were just denied our right to be educated and kicked out of our school because we weren't wearing a mask," Will Wysoglad, a senior at Naperville's Neuqua Valley High School, said in a social media post that has been viewed over 100,000 times since Tuesday. On Wednesday, he, his younger brother and a group of friends were denied entry for a second consecutive day.

"My boys did request a room so they can actually stay in school," said his father, Rob Wysoglad. "The school did say they would look into that, but we'll see what we'll see what happens in the coming days."

"There was a student that tried to remove the mask from another student," D74 teacher Stacy Panoutsos said. "And obviously the teacher put a stop to it immediately, but these are not situations that children should have been placed in."

And in the western suburbs, where District 200 went mask optional this week, a group of parents continues to vocally oppose the move and what they say is the lack of accommodation for those who need to remain masked.

"In order to protect those who are near and dear to me, I'm in a position where my child can't learn anymore. She's literally sat at home for three days," parent Ronak Maisuria said. "No one from the school has reached out in order to provide any educational support."

Hubble Middle School in Warrenville will play host to a school board meeting Wednesday night where all of these issues are expected to be raised, as positions continue to harden among those on both sides of the debate.

When is right time for schools to lift mask mandate?