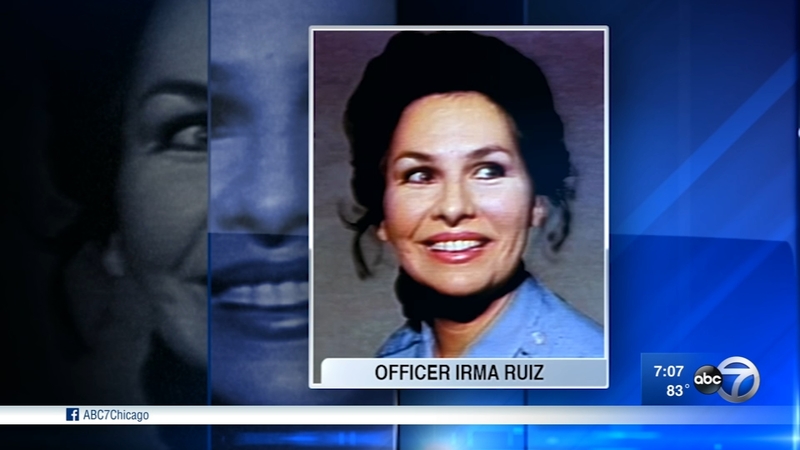 CHICAGO (WLS) -- There is an effort to re-name a Southwest Side park in honor of a slain Chicago Police officer.

Irma Ruiz was one of the city's first female officers to be killed in the line of duty as she protected students from a deadly shooting spree in a school back in 1988.

On Wednesday ABC7 spoke with the officer's partner, Retired Chicago police Officer Greg Jaglowski, who was also injured that day.

"A great honor for her, Irma, she can't get enough honors you know she practically, in one way, saved my life that day," said Jaglowski.

Forty-year-old Irma Ruiz was gunned down in one on September 22, 1988 by Clem Henderson, who went on to kill three others that day in a shooting spree that started at an auto parts store. Henderson ended up at Moses Montefiore School where she and Jaglowski had just been called to escort an unruly student home.

"He had the gun over his head and he came down on me like that, took about three to four shots," Jaglowski said. "Irma heard the shots so came back down the hall the gunman was waiting for her. She had no chance whatsoever."

"We worked for four years together and she was the greatest officer ever," he recalled.

Jaglowski said Ruiz "was aggressive, gentle the way she handled kids, she was the school unit was perfect for her."

"I want young kids and their parents who will come here to play at this park to ask a question, who is Irma Ruiz? And they need to know the story of courage and dedication," said Ald. Edmund Burke (14th Ward).

Ruiz was the mother of four, who at the time ranged from age 8 to 18. She was Chicago's third female officer killed in line of duty.

"It's still sad, when I hear of a police officer getting shot or killed in the line of duty, I am sure for a lot of people, but it is overwhelming. I could cry for 15, 20 minutes and not even know the police officer," Jaglowski said.

The Board of Commissioners at the Chicago Park District is now holding a public comment period on the proposal to re-name Walnut Park in the city's Archer Heights neighborhood to Irma Ruiz Park.

There is already an elementary school in the Heart of Chicago named for her.