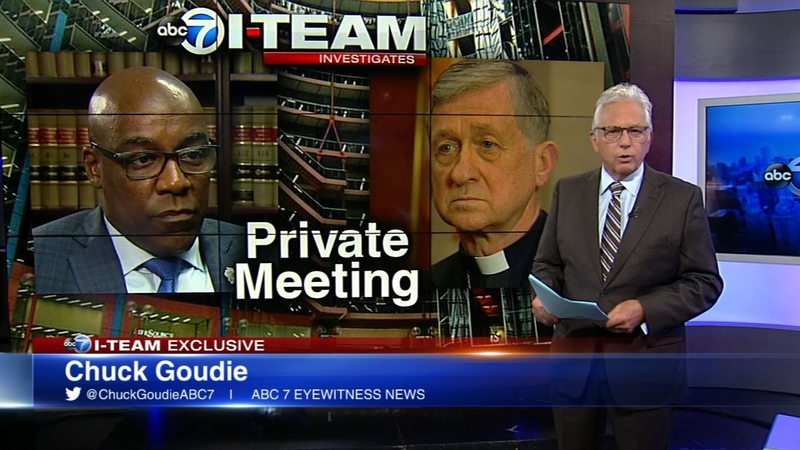 The one-hour, one-on-one discussion took place at Attorney General Kwame Raoul's office in the State of Illinois Thompson Center about two weeks ago. The Archdiocese of Chicago and Illinois' five other Roman Catholic dioceses have been subjects of an ongoing investigation by the state attorney general's office for the past year.

In an exclusive interview with the I-Team on Wednesday, Attorney General Raoul said it was important for him to personally meet with the leader of the Catholic Church here-even as his staff investigators have been carrying the caseload in the rest of Illinois. Raoul told the I-Team that both his discussion with the cardinal and the state investigation are aimed at "making sure that there's reconciliation for survivors and make sure abuse doesn't happen anymore."

A spokesperson for Cardinal Cupich and the Archdiocese of Chicago confirms the meeting and says that it was requested by Cardinal Cupich. We are awaiting a full statement from the Church.

The state investigation began under former attorney general Lisa Madigan. Shortly before leaving office last December, Madigan announced that the investigation found child sex accusations against at least 500 priests and clergymen in Illinois had never been made public. Madigan had opened a case here after a Pennsylvania grand jury investigation discovered more than 300 "predator priests" in a "systematic cover-up."

When Raoul was sworn in last January and assumed the clergy sex abuse investigation, he said that it might be necessary to issue subpoenas to Catholic Church leaders in Chicago, Joliet, Rockford, Peoria, Springfield and Belleville if there wasn't sufficient voluntary cooperation. On Tuesday the attorney general said that no subpoenas have been necessary-although information "hasn't all come at the same speed. It's taking prodding at some point and asking more questions."

According to Raoul "there is a desire to move to that place where people can have a confidence in the Catholic Church as well." He says the investigation is ongoing and not finished, but he would not commit to whether or not he expects criminal charges as a result of the probe. "From a broader standpoint this is not an investigation of a single individual in and with regards to an investigation a criminal act. This is a broader investigation of something that was systemic" he said.