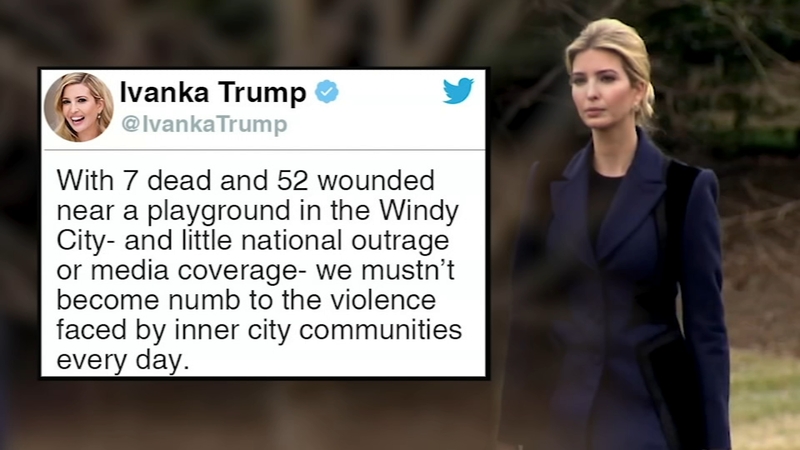 CHICAGO (WLS) -- Chicago Mayor Lori Lightfoot had strong words for Ivanka Trump after the president's daughter tweeted inaccurate information about violence in Chicago over the weekend.

In two tweets Tuesday afternoon, Trump wrote, "As we grieve over the evil mass shootings in El Paso and Dayton, let us not overlook that Chicago experienced its deadliest weekend of the year. With 7 dead and 52 wounded near a playground in the Windy City - and little national outrage or media coverage - we mustn't become numb to the violence faced by inner city communities every day."

With 7 dead and 52 wounded near a playground in the Windy City- and little national outrage or media coverage- we mustn’t become numb to the violence faced by inner city communities every day.

As we grieve over the evil mass shootings in El Paso and Dayton, let us not overlook that Chicago experienced its deadliest weekend of the year.

"She got the numbers wrong, she got the location wrong, that's the danger of trying to govern via tweet," Lightfoot said at a press conference Tuesday afternoon.

"Well, that's the danger of somebody with a platform and audience of that kind that doesn't know what they're talking about and getting the fundamental facts wrong," Lightfoot said.

Fifty-nine people were shot, seven fatally, last weekend across the city of Chicago, not in one location. It was also not the city's deadliest weekend of the year.

There was a shooting in Douglas Park at about 1:20 a.m. Sunday morning that injured seven people, police said. Police said the group of people were standing in the park in the 2900-block of West Roosevelt Road when someone opened fire from a black Camaro. The victims were between the ages of 19 and 25, and no one was killed.

"She's conflating the whole weekend activity into one incident and that's not what happened," said Chicago Police Superintendent Eddie Johnson.

"It wasn't a playground, it was a park," Lightfoot added. "It wasn't seven dead, it wasn't 52 wounded in one incident, and it's misleading. It's important, when we're talking about people's lives, to get the facts correct."

Lightfoot met with Trump earlier this year in Washington D.C., after she took office, and said had Trump or her staff reached out to her she would have happily offered suggestions as to how the government could help the city of Chicago.

"We would offer them specific ways in which the federal government can actually partner with us to help address the issues on the ground," she said.

The mayor said her office reached out to Trump after seeing the tweet to ask why she had not contacted Chicago officials to clarify the facts, and said she had not received a response from the president's daughter or her staff.

The White House released a statement Tuesday evening, saying: "Ivanka has appreciated getting to know Mayor Lightfoot, respects her commitment to addressing this issue and looks forward to continuing the conversation around this issue, workforce development and economic opportunity for all. To the extent that her quote was misleading in implying that all of the shooting incidents occurred in one location, it remains important to note that there were 7 deaths and 52 wounded across the city, resulting in one of the deadliest weekends in the city this year. Her point remains the same, we cannot ignore the gun violence that happens in cities across this country on a daily basis."

Lightfoot and Johnson are both participating in National Night Out Tuesday night, in which events around the city and suburbs are held to help build relationships between police and communities, and promote community partnerships to make neighborhoods across the country safer.

This is the second time in as many days that Lightfoot has lashed out against a Trump. Following the mass shootings in El Paso, Texas, and Dayton, Ohio, she blamed Trump for setting the tone for those deadly attacks with his hateful rhetoric.

"What he has been doing is blowing every racist, xenophobic dog whistle, when you blow that kind of whistle the animals come out," Lightfoot said.