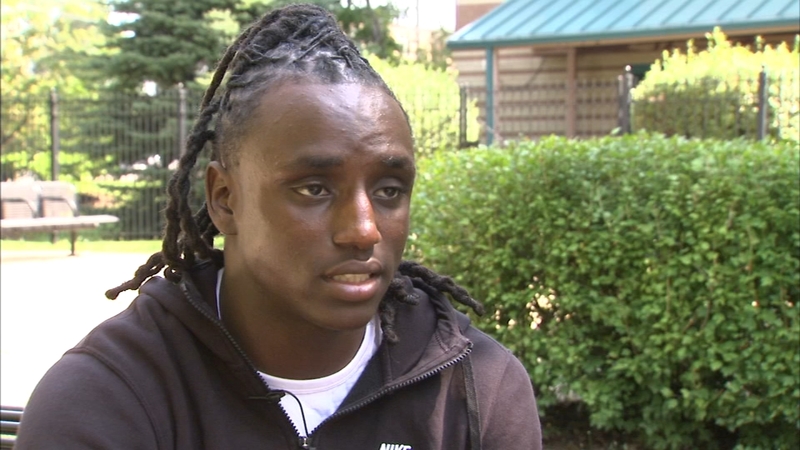 CHICAGO (WLS) -- Ivry Hall is at the airport right now, headed to Alabama State University. He has overcome a number of challenges in his life to get this point.

"I grew up on the South Side. Englewood, 64th and Laflin. My mom did a lot of moving, but that's where I spent most of my childhood," Ivry Hall said.

And Ivry Hall's childhood was filled with trouble...

"Gang banging. I used to smoke when I was little," Hall said.

He also dropped out of school.

"I did a lot of stuff. That's just from the image I was seeing so I wanted to do it too," he said.

Then his single mom got cancer. Ivry was 12.

"When my mom passed away, I was so hurt. And I just wanted to do better," he said.

He went back to school, and eventually, attended Tilden High School. He was living with a cousin who moved to Harvey. It took nearly two hours to get to class.

"I had to get on three buses and one train!" Hall said.

"I don't believe in giving up, and I think that failure is not an option," Hall said.

When he was a senior, his dad died of lung failure.

"Of course, I lost my mom. I lost my dad. I wish they were still here to see what I've accomplished now, but they're not. Everything is not going to come as you want it," he said.

Through the struggles, the Rev. Michael Pfleger has been a rock along with St. Sabina Church, sports and an Englewood boxing gym run by Sally Hazelgrove.

"They are like, 'Ivry, you're going to be something. You're so smart.' And that stuff encouraged me to do good," he said.

"No pity party. No poor me. He was just a young brother who wanted the best for himself and others," said Father Pfleger.

"I always wish that I could graduate valedictorian, and look, I did," Hall said. "I was beyond happy."

Now, with a $10,000 scholarship from a St. Sabina program, he's headed to Alabama State University. His boxing mentor, Sally, has influenced his choices.

"Major in business, so I can open up my own business. I'm not for sure what I want to open up, but I want to help people, like she's doing," he said.

Instead, he's determined to succeed.

"You have to give you 100 percent in everything you do. Once you give up, you'll only be used to giving up. At least try. If you can't do it, continue to try," he said.

After all he's overcome, Hall is headed to the next stage.